Practitioners displayed banners reading, "The CCP removes organs from living Falun Gong practitioners" and "Support 44,000,000 people quitting the CCP". An exercise demonstration and photo exhibition attracted many visitors. Bystanders asked about the persecution of Falun Gong, carefully viewed the poster display depicting Falun Gong's spread around the world, the Chinese Communist Party's persecution of the practice, and the support from people all over the world for Falun Gong. Many people expressed their support and commended practitioners for their courage. 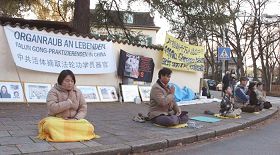 A German woman who had lived in China for many years told practitioners that she had seen a lot of things in China. She knew something about the CCP's persecution of Falun Gong and she believed that it took courage for practitioners to stand up and tell the world the truth of the persecution. She expressed support for Falun Gong by signing the petition.