Falun Gong practitioners were invited to participate in the Fisher's Ghost Parade at the Campbelltown City Festival on the afternoon of November 1, 2008. More than one hundred different groups participated in this annual parade, which began at 1:30 p.m., concluded at 3:00 p.m., and attracted more than 20,000 spectators. The parade procession included several military marching bands; school, community and business groups; a number of ethnic dancing groups; and a variety of antique cars. Elected federal, provincial, and city representatives watched the parade from the main stage, which was set up in downtown. 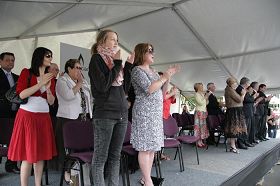 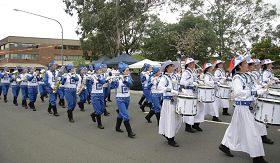 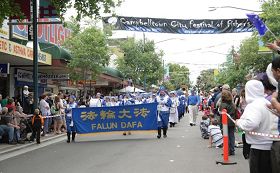 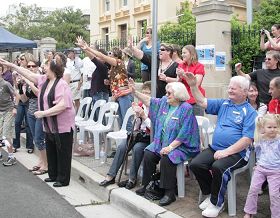 When the Falun Gong practitioners' Divine Land Marching Band approached the main stage, there was enthusiastic applause and cheers. Many spectators waved at the procession and danced to the drumbeats. Through a megaphone, the parade host warmly introduced the features and history of Falun Gong to the spectators.

Behind the band, practitioners demonstrated the Falun Gong exercises on a decorated float while several women practitioners danced in colorful Tang attire.

The Falun Gong presentation was well-received. Practitioner Xiangyu Wang said that she distributed many Falun Gong truth-clarifying brochures and many onlookers extended their hands to obtain a copy.

“Russia: Promoting the Fa at a Children's Sports Show (Photos)”