Munich, Germany: "It is time for us Europeans to speak out!" (Photos)

(Clearwisdom.net) On October 18, 2008, Falun Gong practitioners in the Munich area held an activity on Malin square in the town centre exposing the CCP's persecution of Falun Gong and supporting the 40 million people quitting the CCP. The activity drew in a lot of Munich city residents and tourists. Many people who condemned the CCP's live organ harvesting of Falun Gong practitioners signed their names at the petition table, including tourists from Japan, Thailand, India and Taiwan. There were also people expressing a wish to learn Falun Gong, inquiring about the local practice sites. Many Chinese people came to look at the photo exhibition and took photos with the Falun Gong practitioners practicing the exercises. There were also people who expressed a wish to quit the CCP and its affiliated organizations on the spot. 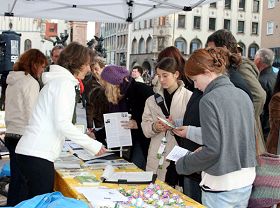 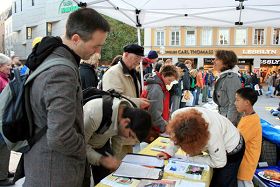 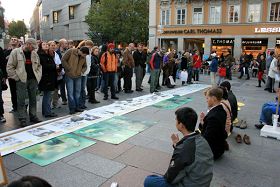 Over the weekend the autumn wind was crisp and clear. Many sightseers in Munich came and went on Malin square. When they saw the scene of Falun Gong practitioners practicing the exercises, they stopped to have a look.

While the Doelin couple from Bamberg were watching the Falun Gong practitioners' practicing the exercises, their granddaughter was amongst the crowd looking at the photo exhibition exposing the CCP's persecution of Falun Gong practitioners. When Falun Gong practitioners asked them to sign their names, they said that last weekend they signed their names in Bamberg, in protest against Eutelsat yielding to the CCP's pressure to stop NTDTV's signal in Asia. Mr. Doelin, who holds a technological job, said, "Our interest was first drawn to this matter before the Olympic Games. It was not spread much in society before then. I hope more people can stand up and oppose the CCP. I hope that NTDTV's broadcasting in Asia can resume." His wife added, "We cannot remain silent. It must be time for us Europeans to speak out."

Many Tourists from China expressed worry about the situation in China and wished to find a solution. Many of them wished to know what Falun Gong is and why one should quit the CCP and so on. Many people discussed these questions with Falun Gong practitioners. An educated woman who had just come back from visiting her parents in China said, "Recently I visited China. I saw much flourishing on the surface; however, there are many problems in China. Most people showed apathy to this. I wanted to do something to change this situation, but I feel I don't have the capability. Upon seeing you Falun Gong practitioners' persistent efforts, I admire you. I believe that Falun Gong practitioners' way of doing things can wake up the Chinese people's numb hearts."

“Sweden: Practitioners Explain the Facts about Falun Gong to Tourists in Stockholm (Photos)”