Sweden: Practitioners Explain the Facts about Falun Gong to Tourists in Stockholm (Photos)

(Clearwisdom.net) On October 18, 2008, many Falun Gong practitioners from across Sweden participated in activities that were held at Mynttorg Square in Stockholm, expressing their support for the 44 million people quitting the Chinese Communist Party (CCP) and its affiliated organizations. They also exposed the CCP's crime of organ harvesting from living Falun Gong practitioners for profit. 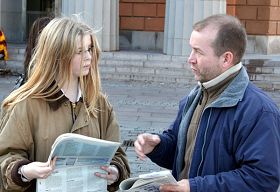 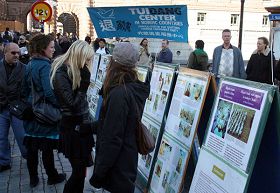 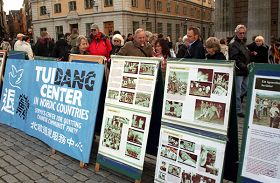 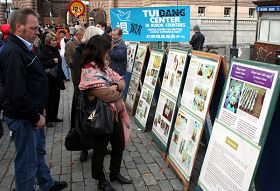 The autumn weather in Stockholm was pleasant and the whole city was spectacularly decorated with both the red and yellow tree leaves against the blue sky. Large numbers of tourists were attracted by such beautiful scenery. Groups of people came to the famous scenic spots in Sweden to see the Changing of the Guard Ceremony at the Royal Palace. The only way to the Royal Palace is through Mynttorg Square, so when people passed by, many of them were attracted by the display panels with banners and pictures.

One middle-aged couple from UK traveling in Sweden carefully read the display panels exposing the CCP's persecution of Falun Gong. Having finished viewing them, the man, pointing at the book, Nine Commentaries on the Communist Party, said to a Falun Gong practitioner, "I have read the book in UK. I believe that the CCP will fall sooner or later."

Two university students from France came forward and had a chat in English with Mr. Liu, a graduate student and a Falun Gong practitioner. They said that they felt shocked after reading the display panels. One of them asked for a set of materials in Chinese for her Chinese classmates. At the same time, she left her email address with Mr. Liu for more information. She added that in the future, she would pay closer attention to the human rights situation in China.

A twenty-year-old Chinese university student from Spain had just come abroad from China. He felt so fresh and curious about life abroad. Poisoned by the CCP culture, he could not understand why Falun Gong practitioners were explaining the facts there. Ms. Zhang and her husband explained to him in detail about how Falun Gong is being persecuted by the CCP in China with her own personal experience. In particular, she told him that the CCP staged the Tiananmen Self-immolation incident in order to frame Falun Gong and that the CCP commits atrocities by removing organs from living Falun Gong practitioners for lucrative profit. Upon hearing the facts, this young student kept nodding and said, "I have heard a little about these things before and also received emails clarifying this, but I was not interested in them and did not pay attention. Now I understand." Finally, he said that he would be abroad studying for six months and would like to know more things outside China so that he could make his own choices.

On the same day, many Chinese tourists came and watched the Royal Guard Changing Ceremony. Many of them were pleased to accept the Nine Commentaries on the Communist Party and information about Falun Gong. But some people even did not dare to take the Epoch Times newspaper. Just at that moment, a tour guide spoke loudly, with a newspaper in her hand, "Why do you fear reading this newspaper? You have nothing to worry about! The people here read this newspaper." Three young people in the group from Beijing each accepted a set of Chinese newspapers and information about Falun Gong. Feeling delighted, they said: "We should read this information carefully! Thank you very much!"

“Munich, Germany: "It is time for us Europeans to speak out!" (Photos)”