(Clearwisdom.net) On October 17-18, 2008, a Falun Dafa Cultivation Experience Sharing Conference was held at a conference center in St. Petersburg. Falun Gong practitioners from across Russia, Ukraine and other former soviet countries shared their cultivation experiences during the Fa rectification period. 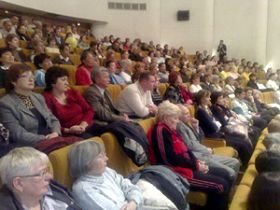 A glimpse of the Fa conference 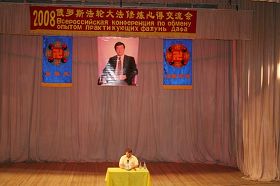 A practitioner makes a speech

Practitioner Arksana from Pyatigorsk talked about how she looked inward during conflicts. She said that when she encountered conflicts at work, at first she had difficulty looking past the rights and wrongs of things on the surface. She believed that she hadn't made any mistakes, and felt that she was wronged. But when she calmed down and looked inward on every single thought, she found many attachments. Hence she realised the importance of looking inward during each conflict.

Practitioners from St. Petersburg shared their experiences of continuously sending righteous thoughts and clarifying the truth in front of the Chinese Consulate since 2004. Each practitioner talked about his or her various encounters and feelings, including the difficulty in saving people, and Master's benevolence. Some Chinese people asked how much they could earn by being there each day. When they were told calmly that everyone went there voluntarily with only the hope that people could learn the truth, many were surprised and touched. During this process, practitioners also encountered pressure from the Russian police who didn't know the truth. After coordinated efforts to explain the truth to them, many policemen no longer interfered with practitioners, and some even helped the practitioners.

Practitioners also talked about what they had learned in the process of doing the three things well. Many practitioners said that they saw their own shortcomings through the Fa conference, which they hoped to use as an opportunity to be more diligent in the future and do the three things better. 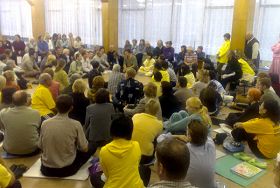 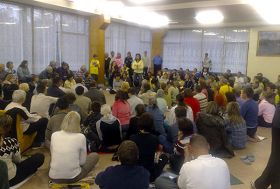 Before the conclusion of the Fa conference, practitioners study the Fa and exchange insights