(Clearwisdom.net) On October 18, practitioners from Kuala Lumpur held a series of activities in a park to clarify the truth and introduce Falun Dafa to the public. 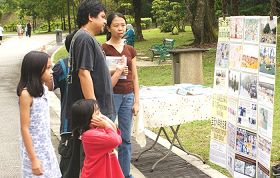 (Clearwisdom.net) On October 11, 2008, many people strolling around Waldshut city centre in Germany stopped in front of the Falun Gong practitioners' stand. Some watched exercise demonstrations and looked at photos of Falun Gong's spread around the world. Some read about the Chinese Communist Party's (CCP) torture of Falun Gong practitioners. More accepted leaflets and asked to sign the petition demanding the United Nations to investigate the crime of organ harvesting.