New York: Parade and Rally in Brooklyn Support Those Who Have Renounced the Chinese Communist Party (Photos)

On September 28, a parade and rally were held in Brooklyn, NY, to support the millions of people who have renounced membership in the Chinese Communist Party (CCP). Participants called upon Chinese people to recognize the evil nature of the CCP and withdraw from it. 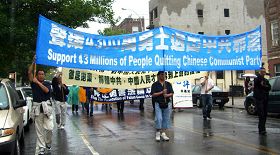 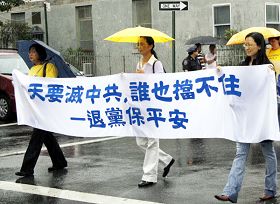 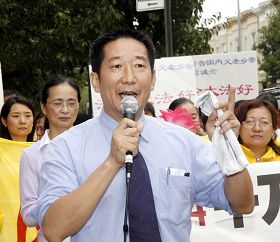 Liu Guohua, a Flushing resident, speaks at the rally 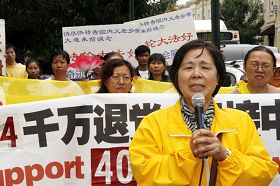 A Falun Gong practitioner tells her experience of being persecuted in China.

During the parade, some practitioners performed waist drums while others passed out about 1200 newspapers providing information about quitting the communist party. A rally followed.

Falun Gong practitioner Zhang Mengye's wife talked about their experiences of being persecuted in China. Zhang Mengye is a former classmate of Hu Jintao, the Chinese president. "We told Hu Jintao about Falun Gong, so he knows about it clearly. But we still were persecuted," she said. In the detention center, Mr. Zhang was hung up and lashed, and not allowed to eat or sleep. Policemen beat him badly and applied all kinds of tortures to him. He lost weight and only weighed 70 pounds due to the torture.

Later, the couple escaped to Thailand, but CCP spies arranged for a car "accident" that killed Mr. Zhang. Ms. Zhang is calling upon people to recognize the evil nature of the CCP and renounce their party memberships.

Many people stopped and listened, and some young Chinese people joined others to quit the CCP on the spot.