(Clearwisdom.net) Agnes Bristow is an author of educational materials. She attended the 2008 Mid-Autumn Spectacular by the Divine Performing Arts at the John Bassett Theatre in downtown Toronto and highly praised the show. "I think about all the live performances that I've seen, I can't think of anything at the moment that touched me as much as this one. I think I just used the word phenomenal too many times to describe it!" 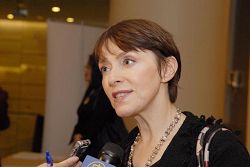 Mrs. Bristow produced a series of seven videos and seven books that are used in schools across Canada and the United States in schools and universities. She and her husband wrote a play. Her husband, Leif Bristow, is a film producer. This was the couple's third time to see a Divine Performing Arts performance.

Mrs. Bristow said, "I was constantly looking at the faces of the dancers and their body language. And they were telling a story as they were dancing. And I think that added a whole lot to the performance," she said. She was deeply impressed with such an incredible experience.

She also liked the costumes, saying, "The costumes tell a story, they're bright and interesting and colorful. It makes the visual experience much more exciting." "The first costumes [referring to the dance "Nymph of the Sea"] were so brilliant and you felt like you were watching the ocean."

"Watching the performance, I felt like I was in heaven"

Mrs. Bristow said that, "The whole thing had many dimensions to it. There was so much that was incredible. Watching the dance I felt like I was in heaven."

The first program of the show "Creation" touched Mrs. Bristow's heart. She said, "I thought it was really mystical with all the mist coming up and you felt like you were in heaven and I thought that that was such a great introduction to the whole spirit of the show because it really set the stage for the phenomenal experience you were going to have. You become part of the emotion that it creates and you become very drawn into it."

"Every time I talk to people about the show it's calming for me and when I leave I feel like I'm walking on those thoughts, it's that nice calm place," said Mrs. Bristow.

Mrs. Bristow thought that the message Divine Performing Arts conveys is, "All about caring for other people, nurturing the human spirit and just love and support." She felt she was purified and uplifted.

The performance that stood out most for her was Risen Lotus Flower and Power of Awareness -- a depiction of the persecution of the spiritual practice Falun Gong in today's China.

"I think that summed up the whole show and then bringing people together for a common purpose and fighting something that isn't right in society [in a compassionate manner] and that was the message that I got from it," she said.

Mrs. Bristow concluded by saying, "I thought it was one of the most phenomenal shows I have ever seen. I will come back every time."

“New York: Parade and Rally in Brooklyn Support Those Who Have Renounced the Chinese Communist Party (Photos)”