Belgian MEP: What Eutelsat Has Done Is Wrong (Photos)

On October 9, 2008, NTDTV and its supporters from other places held a large-scale assembly in Schumann Square in Brussels to appeal for the European Union to address Eutelsat's shutting down broadcasting from the Sound of Hope Radio Network and the NTDTV into China by falsely claiming a "technical problem." Behind this incident stands the Chinese Communist Party (CCP), which has used economic incentives to induce Eutelsat to block freedom of the media. Some European Falun Gong practitioners participated in this event in support of NTDTV's broadcasting the truth about the CCP's brutal persecution of Falun Gong. 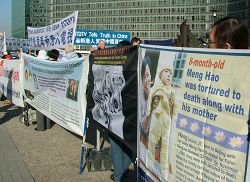 Banners on the stage 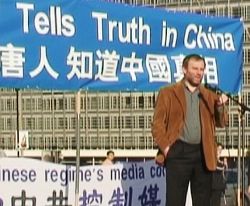 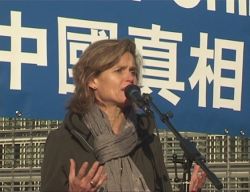 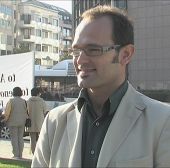 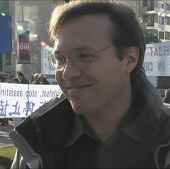 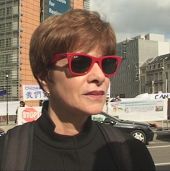 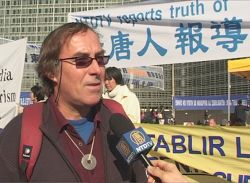 Passerby Chris: Your matter is our matter 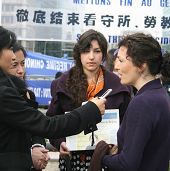 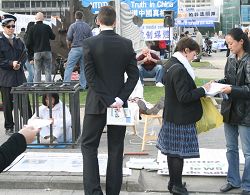 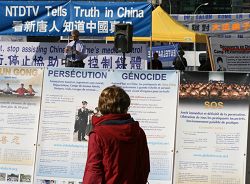 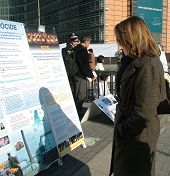 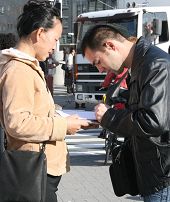 At the press conference, the assembly organizer and spokesperson for NTDTV, Carrie Hung, provided some background regarding how and why the European Satellite Company shut off NTDTV's signal unilaterally. Afterwards, she cited the poisonous powdered milk scandal which was exposed recently in China by saying, "This is not about an individual enterprise's failure, it represents the entire industrial system and government's corruption. If there is no independent media surveillance, the problem will not be discovered until after such incidents occur.

Several months ago, Belgian MEP Bart Staes had placed information about the Eutelsat incident on his own official website saying, "What Eutelsat does is wrong, and we as Europeans have the strength to force Eutelsat to change its behavior."

Spanish MEP David Hammerstein said, "If we do not guard the European Union's basic principles of democracy, not only will China have the problem, but this problem will also reflect on Europe."

EU Reporters Without Borders representative Mr. Olivier Basille said, "What exactly has the company, which should comply with European values done. This is not only China's problem, but also a European problem."

The chairman of the Friends of Tibet of Belgium, Ms. Inge Hermans, stressed in her speech that NTDTV has been speaking out for persecuted groups and featuring the opinions of different viewers, and they will support unconditionally the restoration of the signal.

The assembly started at nine in the morning and finished at three in the afternoon. During lunchtime, workers from the EU buildings also came out to observe. Passersby listened attentively to the speeches from the loudspeakers. Many people accepted informational materials, listened, and learned why the European satellite company has done this.

“Australia: Spreading the Fa at Martin Place in Sydney (Photos)”