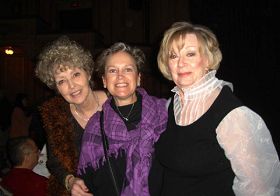 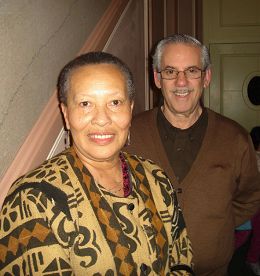 Patricia Schogel said she sensed the spirit of tolerance in Chinese culture throughout the show. 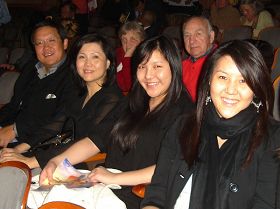 Mr. Jie Wenji, from the Taipei Culture and Commerce Office in the US, missed the show in Washington, DC, so he came to see it in Philadelphia with his family. 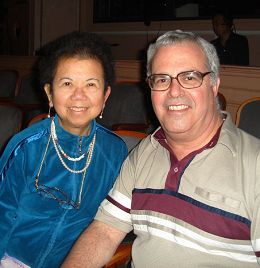 Jessica of Philadelphia with her husband. 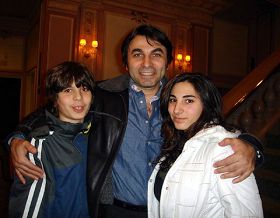 Dr. Albert Aloian of Philadelphia at the show with his son and daughter. He said the show was a beginning for him to learn about Chinese culture. 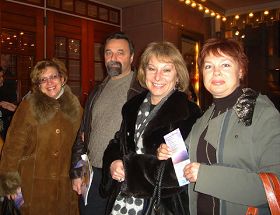 Four Russians at the show. 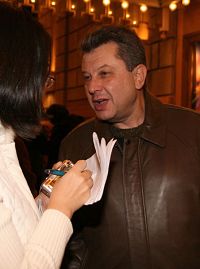 Alex commented on the perfection of Chinese culture. 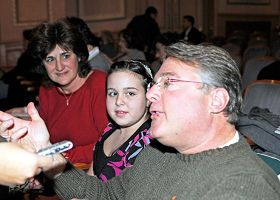 A doctor at the show with his wife and daughter.

Patricia Schogel, a social worker, said that she sensed the spirit of tolerance in Chinese culture from the show. She had high praise for the talented dancers. She saw an advertisement for the show on TV and booked her tickets immediately. She said that she liked the show very much and would come again next year.

Nanie of Philadelphia majored in opera in college. She said the soprano and the mezzo-soprano in the show were excellent, and took her back to her opera class in college. Nanie liked the performances that reflected the realm of gods and Buddha. Her daughter, Kella, especially liked the beautiful costumes and dances.

Mr. Jie Wenji, an officer at the Taipei Culture and Commerce Office in US, missed the show in Washington, DC, so he came to the show in Philadelphia with his family.

Mr. Jie and his wife said they saw traditional Chinese dances in Taiwan when they were young. They said the show was a perfect manifestation of Chinese culture. Both of them were touched by the performances that portrayed the suffering of Falun Gong practitioners. They are against the persecution and said that, when more people know the truth, more people will step forward to support Falun Gong.

Ms. Chen from Malaysia saw the news about the show in The Epoch Times. She brought six family members to the show. Ms. Chen said this was the first Chinese show she had seen since she moved to America. Her grandson, Michael, is a third generation immigrant, and knows very little about Chinese culture. He liked the show very much, especially the drum dance.

Fourteen people from Russia came to the show together. Dr. Albert Aloian said he sensed the compassion and love in Chinese culture from the show. He commented on the uniqueness of Chinese culture and said this was a beginning for him to learn about it.

Jessica from the Philippines came to the show with her husband. The colorful costumes and beautiful dances reminded her of her hometown. To her husband, the greatest thing was that he learned the truth about Falun Gong from the show.