(Clearwisdom.net) On January 30, 2008, the Divine Performing Arts staged its first performance of the Chinese New Year Splendor at Radio City Music Hall in New York. Two exchange students from Germany, Marina and Felada, came to watch to show. During the intermission, they said they were going to ask their friends to come and see the show, noting that the costumes were beautiful, and the choreography and stage design were great. Their favorite programs were the powerful drum performances.

They continuously inquired about where the Divine Performing Arts Company will perform on its world tour. When they learned that it will go to Berlin, they were excited and said they would tell their friends in their home town. 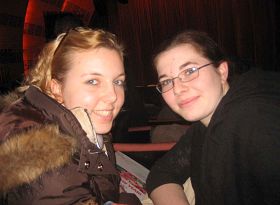 Marina and Felada said they would tell their friends in Germany to watch the Chinese New Year Splendor in Berlin.

Olga and her husband Edward came from Milford City, Connecticut to watch the show. Olga learned about the show from a TV advertisement. She said the music and dance in every program were beautiful. Edward said the way the performance was presented can help people better understand the beauty of the five thousand year old Chinese culture. Olga said she would tell her friends about this show and she would come to see it again. 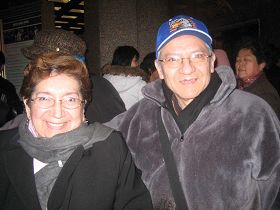 The Alfonso couple from South America

The Alfonsos, a couple from South America, praised the show, saying "The show was so good that the whole world should see it."

“Haiti Consul General: Connecting the Past to the Present (Photo)”