Haiti Consul General: Connecting the Past to the Present (Photo)

After the show concluded, a reporter met the Consul General of Haiti outside the theater. Consul General Felix Augstin said, "Fantastic! Fantastic! It's a show to remember. It connects the past to the present, and shows the 5,000 years of civilization in China. It's  a very good show! I will come back again." 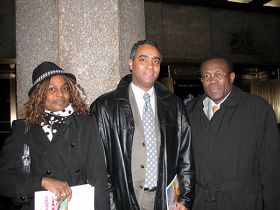 Consul General Felix Augstin's favorite dance was "Drummers of the Tang Court. "It's a connection between your civilization and our civilization, so I think the drum was one of the most beautiful part of it. Both of the drums were great."

The reporter also met an Indian lady with her child, in traditional costume. She did not reveal her name, but indicated her husband was an official from the Indian Consulate. “This has been a very different experience for us. It's been the first experience for us to see a Chinese show like this. [The show] was extremely colorful. I have read a lot about Chinese shows and culture, I think this show very well represents what I have heard about or read about China,” she said. Her favorites were also the drum performances.