The San Antonio MLK March is considered the largest march in the country aimed at remembering and continuing the legacy of Dr. King. The three-mile march began at the Eastside Boys & Girls Club at 3500 MLK Drive (MLK Freedom Bridge) at 10:00 a.m. on January 21. The march ended at Pittman-Sullivan Park located at 1101 Iowa, where the commemorative program was held.

Falun Dafa fliers were handed out to the people, and everyone was glad to receive the information. Several people came through the crowd to inquire about the practice. It was a wonderful opportunity for the people of San Antonio to learn about Falun Dafa and the Chinese Communist Party's ongoing persecution of the practice in China. 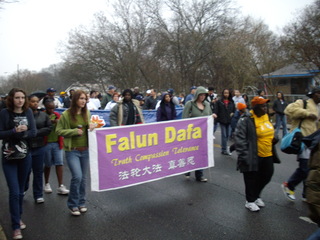 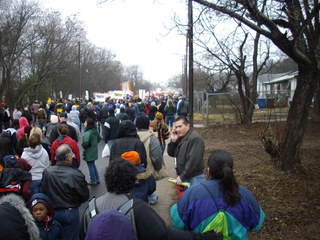