(Clearwisdom.net) Four performances of the Chinese New Year Spectacular dazzled and uplifted audiences on January 18-20 at the new Nokia Theatre in Los Angeles. 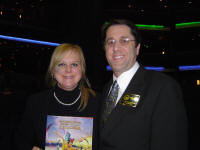 Chris Cagle, Council Member from the City of Redondo Beach and his wife

Chris Cagle, a City Council member from Redondo Beach, California, went to see the show with his wife Diane on January 18, 2008. After the show, they agreed to be interviewed and share their opinions about the performance.

Chris said, "I loved it. It was fantastic! I loved all the costumes and all the fancy music. The dances and everything were really fascinating. I also liked how they explained each scene so it made it really educational. I learned a lot, even how to speak a little Chinese, like, "Xin Nian Hao." It was really neat. I enjoyed it."

"They showed a lot of traditional things that I wasn't aware of. Chinese history goes back thousands of years so it's very different than the United States. Our history is a just a couple of hundred years. We're fairly new compared to China so there's a lot to learn. It's fascinating."

Chris liked the "Mongolian Cups" dance and loved the drumming that they did as well. He thought the chopsticks dance was fascinating.

Chris said, "I liked the different costumes that they had, the fabrics, the embroidery of the different ladies that were dancing. That was really fascinating. I liked the storytelling that they did, like in the 'Lady of the Moon.' That story and the other one where the birds were going up to the sky and creating the Sun. That was really neat too."

Diane Cagle, a speech language therapist, accompanied her husband at the show. She said she loved the show, and that it was fascinating. "I loved the costumes, the dancing. I loved learning about the Chinese culture and the history. It was fascinating."

Diane had several favorites in the performance, but it was hard for her to pick a single most favorite. She said, "I enjoyed the stories such as the 'Nymphs of the Sea,' the 'Drummers of the Tang Court,' the 'Mongolian Cups' dance, the 'Lady of the Moon,' 'Descent of the Celestial Kings,' and 'Stick Zest.' You can say that I liked a lot of them. I liked the stories but I also liked the costumes."