The Divine Performing Arts Touring Company will present the Chinese New Year Spectacular in Taiwan from February 29 to March 18. The show focuses on promoting traditional Chinese culture. Last year when the company performed in Chiayi, all 5,000 seats in the hall were occupied. People in Chiayi still talk about what a great show it was. 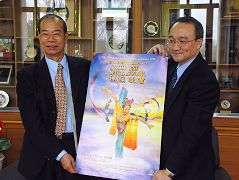 Coordinators visited local government entities and other organizations on January 16 and were welcomed with enthusiasm. President Li Ming-jen of Chiayi University said, "I saw it last year. Very good. Such a perfect art performance should be made available to more people. I will see the show this year." 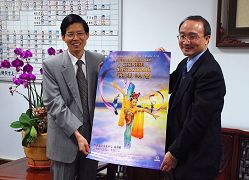 Song Guo-yeh, Chief Prosecutor for the Chiayi Court Prosecution Department, had heard of the Divine Performing Arts New Year Spectacular but has not seen it yet. After hearing an introduction to the performances, he said he appreciated the information and would like to see it. 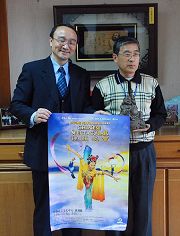 President Lai Yu-cheng of Chengwen Primary School said, "I watched the show last year. It was wonderful. I was impressed with each performance. I'll see it this year, too." He admired the effort to promote Chinese culture. He said he hoped to join the effort after retiring. 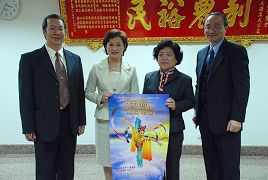 After seeing the introductory DVD about the Chinese New Year Spectacular, Huang Pei-chen, director of Chiayi Farmers' Association, and Hsiao Shu-li, General Manager of the association, had high praise for the production and welcomed the Divine Performing Arts to Taiwan. Ms. Hsiao said, "It is so fortunate that we can see a performance by such a large international artistic company like Divine Performing Arts."