Mayor of the City of Waterloo, Canada: "The Show Is Awesome" (Photo) 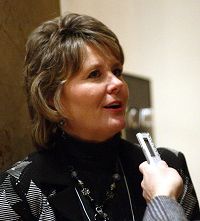 Ms. Brenda Halloran, mayor of the City of Waterloo

Ms. Brenda Halloran is the mayor of the City of Waterloo. She said to the reporter, "The show is awesome. I have never seen such a good performance before."

The colorful costumes and smooth dancing made her watch attentively and anticipate the next performance.

Ms. Halloran said that her favorite program was "The Fruits of Goodness." When the two youths saw the divine beings, they respected the divine beings and their lives were changed. It represents the influence of belief in God. "I was impressed. It is important for young people to have belief, and to be respectful and considerate of others."

Ms. Halloran said, "I did not see Chinese dancing before. I am fortunate to watch such a large scale Chinese dance performance. It will remain a beautiful memory for me."

She said she would love for this show to be held in the city of Waterloo. There are about 500,000 residents in Waterloo and Kichener nearby. "We have a Chinese community. They would love the show. We also have many Chinese students from China. The tickets would be easy to sell," said Ms. Halloran.

“Professor of Film: The Show Is Full of Surprising Delights (Photos)”