Professor of Film: The Show Is Full of Surprising Delights (Photos)

At 8 p.m. on January 18, 2008, the Divine Performing Arts held the first show in Sony Center, Toronto, Canada. It won acclaim from audience members of all walks of life. Barbara Evans, Associate Professor in the Department of Film at York University said that the show was full of surprising delights. 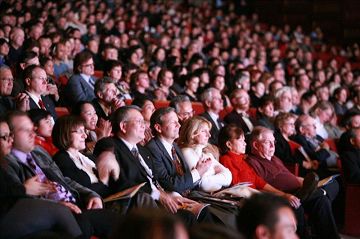 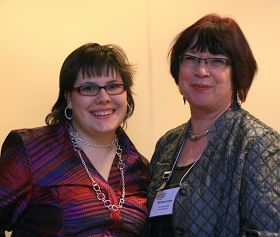 Barbara Evans, Associate Professor in the Department of Film at York University and her daughter Crystal, an art major

Ms. Evans thought the show was wonderful with colorful costumes and spirited dancing. She thought many dances presented a serene and peaceful spiritual realm. She especially liked the "Drummers of the Tang Court" and the dance "Mongolian Cups."

Regarding the persecution of Falun Gong in China depicted in some of the performances, she said that such persecution cannot be tolerated no matter who it is or where it is happening. Any group being suppressed should be able to speak out, not to mention this group that is presenting a message of peace and good values.

Ms. Evans's daughter Crystal, who is majoring in art, said the show was fantastic and that the costumes and dancing were beautiful.

She said, "The backdrops were wonderful. The backdrop and the stage were very well integrated. Those divine beings became visible and then suddenly descended to the stage. It was marvelous! The English words on the backdrops helped us to understand the lyrics and enhanced the meaning of the show."

Crystal said that she could tell that Chinese dancing requires advanced skill, while stressing inner emotions and expression. The audience can sense the peace and noble realm of the performers from the performance. She felt as if the music led her to recall a memory from in deep inside her heart. Those pieces were brand new to her, but she felt as if she had heard them somewhere before.

“Mayor of the City of Waterloo, Canada: "The Show Is Awesome" (Photo)”