"They have a precious purpose and I, as a Riau Representative Government Member, give full support to this purpose," said Ibu Aida Ismah Abdullah, wife of the KEPRI Governor, drawing an ovation from the 200-strong crowd at the Global Human Rights Torch Relay in Batam, Indonesia, last Sunday.

Addressing the severity of the issue to members of human rights organizations, the Red-Cross Society, athletes, and reporters in front of the Batam Mayor's Office, Lady Aida urged the world to "work together to show our solidarity and end the persecution of Falun Gong in China."

The Torch Relay, which started in Athens, Greece, on August 9, 2007, by the Coalition to Investigate the Persecution of Falun Gong (CIPFG), arrived from Bali on the morning of January 13. The two-hour ceremony bore a resemblance to the Olympics ceremony, with maidens dressed in ancient Greek costumes carrying the flame, which was passed on to athletes in a 10-km relay that followed. 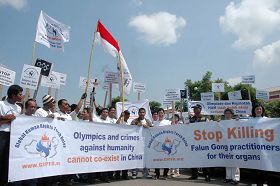 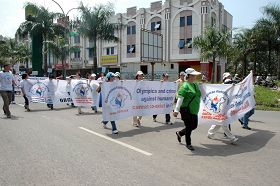 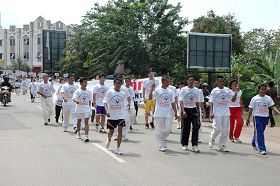 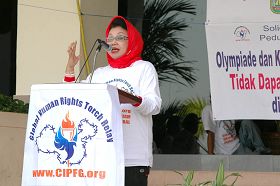 Emotions soared at one stage of her speech when the affable First Lady recited a poem she penned about the organ-harvesting atrocity. Tears welled-up in the eyes of many in the audience.

"...There has ever been a single country that truly values or treats human rights with integrity...my fellow compatriots, what can be more brutal than stealing and selling the organs of your fellow countrymen? We are calling for justice. We are voicing our frustration from across the sea. Stop the abuse, stop the cruelty, stop the organ harvesting, and stop your ceaseless human rights violations immediately..." Other speakers commented on the importance of the call for human rights in China.

Dr. Dzulkifli, a Riau Governor Representative, praised the organizer for the opportunity to stand up for freedom. He also stressed, "Human rights abuse is our main enemy and we need to help end it as soon as possible." Andreas, the Batam Solidarity for Global Human Rights leader said, "The Chinese regime (CCP) is always covering up facts and spreading lies around the world. By holding the Human Rights Torch Relay, we try to wake up the CCP, show them that people around the world know the facts, and hope they can search their conscience, stop the human rights violations, and show remorse to the world." 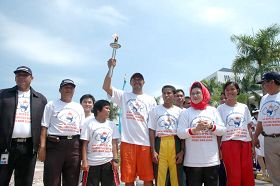 The Human Rights Torch will pass through 37 countries on five continents, leaving in its wake a message that the free world will not allow injustice to hide behind a symbol of world peace.

Its message, "The Olympic Games and crimes against humanity cannot coexist in China" highlighted the ongoing crackdown and ironical persecution of Falun Gong practitioners who cultivate the principles of "Truthfulness, Compassion and Forbearance."

General Ismeth Manan, a representative of the Riau Chief of Police observed, "To serve and protect citizens is our (police) duty. So if the police intimidate and attack peaceful and harmless citizens, it is a human rights abuse. Honorable police officers will never do that."