Sally and her friend Palmer came to the Boston Opera House on January 11 and watched the show. She said, "The artists are beautiful, and their dancing is brilliant. I like the dance by the girl with long white sleeves. It was very smooth and elegant."

In the afternoon on January 12, Divine Performing Arts put on its last show in Boston to a packed house. One of the audience members, Jacqueline, works in Boston after coming over from France. Jacqueline's friend Florence is also from France and works as a software engineer. They said that the show was terrific, with outstanding costume design and graceful dances. They were surprised to see dances about Falun Gong, as it is currently being suppressed in China and it takes great courage to give such a performance. They inquired, "What does Beijing think about this show?" 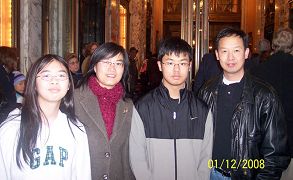 A family from Boston

A chef and his family from Boston are loyal fans of the NTDTV shows. Upon learning that the Chinese New Year Spectacular was coming to Boston, he got the best tickets he could. On January 12, the whole family came to the show and brought a small gift for the friend who introduced him to the show.

“Saving Sentient Beings Is the Most Important Thing”