The Chinese New Year Spectacular, which played to highly appreciative audiences in Ottawa, will premier in Theatre Maisonneuve in Montreal on January 15, 2008. Presented by the Divine Performing Arts touring company, the tickets for this show of authentic classic Chinese culture have almost sold out. 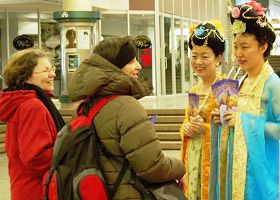 People in Montreal look forward to the show

Mr. Ratsimbazafy Celestin, an energy optimization expert for Hydro-Quebec, and his wife, Marie-Christine Baucelle, a nurse in Ste-Justine, bought themselves tickets in the third row so that they will be able to see the costumes clearly. They are looking forward to the show with great anticipation.

A lady who saw the Chinese New Year Spectacular last year rushed over with a stack of money in her hands. Though the sales agent couldn't find the seats she wanted right away, she said, "You don't mind if I pay first, do you?" As she waited, she helped distribute flyers and told people how wonderful the show is. The lady made three gift bags for her family. Each one has a ticket for the upcoming show, a picture album, and a DVD about the show last year.

Ms. Shu Zheng, a Taiwanese graduate student who is studying the connection of the nervous system to music in medical school at McGill University, said she had 15 years of experience with piano. She was moved after reading the booklet about last year's show and decided to catch it this year. She was amazed that ten shows of Holiday Wonders had been given on Broadway. She repeated, "It must be great if it played on Broadway." She is looking forward to watching the show.

“Mr. Ma Guifeng Tortured to the Brink of Death”