From January 10 to 12, the Divine Performing Arts Company presented four shows of the Chinese New Year Spectacular in Boston with great success.

Kevin is a marketing manager from Princeton, a city about 50 miles west of Boston. Kevin, his wife Carol and their adopted daughter Kalina watched the show. Kevin said that the show was very beautiful, from the costumes, music to the orchestra performance, and the dancers were very elegant. 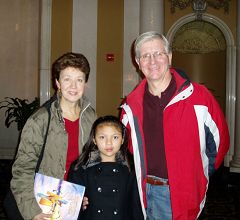 Kevin watched the show with his family

Carol has a ballet background and a great appreciation for dance. She said that the performance was intricate and elegant, and the dancers were talented and yet reserved. She liked the presentation of cultural values through fan, chopstick and bowl dances, and was very happy to learn more about Chinese culture from different regions of the vast country.

Kevin said that one of the reasons for them to come such a long way to watch the show was their daughter Kalina's interest in the show.

Carol mentioned that she obtained a video about Falun Gong several years ago and had wondered why a regime would persecute a peaceful and compassionate group of practitioners. She said that the show reminded her about the persecution and she would watch the Falun Gong video again.

“The Story Behind a Happy Family Photo”