Ellen Sanders, a local business manager, came to the NTDTV Chinese New Year Spectacular show in Boston with her mother and two friends on January 12. 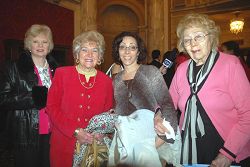 Ms. Sanders told the reporter that the show was very appealing and that the background designs were beautiful. It made her feel as if she were in China. She said that she learned a lot about Chinese culture from the show and that the principle of "Truthfulness-Compassion-Forbearance" deeply touched her heart.

Ms. Frances Sagan, one of Ms. Sander's friends, had high praise for the costumes. She especially enjoyed "The Sacred Calling" and the humorous hosts. She said that she has lived in Boston for a few decades, but she didn't know that the oldest Chinatown in the United States is in Boston until the hosts of the show mentioned it.

Both Ms. Sanders and Ms. Sagan said that the show was world class and that they were fortunate to catch the last show in Boston this year.

“Chinese Audience Member in Ottawa: "I See the Power of Forbearance" (Photos)”