Finland: Calling for an End to the Persecution in China (Photos)

On January 5, 2008, the cold winter wind did not stop Falun Gong practitioners in Helsinki. As usual, because there are a large number of people present on the weekends, the practitioners went to the central railway station to raise awareness about the evil nature of the Chinese Communist Party (CCP), which persecutes Falun Gong.

Finland has a population of over five million, and the capital city of Helsinki has about 500,000 inhabitants. Rarely do the people gather together in huge numbers. Practitioners started raising awareness about this issue in 2000. Since then, they have made use of all kinds of opportunities--exhibitions, city parks and busy streets in the busy summer tourist season, in the grand hall connecting the subway and the train station, the central railway station, and other wintertime community activities--to demonstrate the peaceful exercises of Falun Gong and its lofty principles of Truth, Compassion, and Forbearance to the Finnish people. At the same time, they expose the facts of the CCP persecution of Falun Gong practitioners in China that has been going on since July 20, 1999. To awaken people's conscience and compassion, they appeal to people to help stop this brutal persecution. 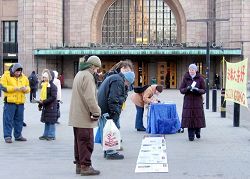 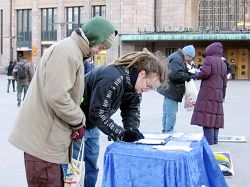 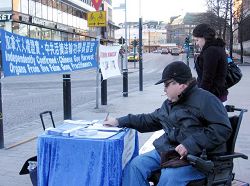 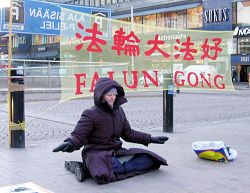 A practitioner demonstrates the meditation exercise in the cold weather

"This is merely the tip of the persecution iceberg. Great numbers of Falun Gong practitioners are missing, and the CCP is known to harvest organs from living practitioners for profit. That facts are still being covered up in China by the CCP's strict information blockade.

"This persecution has continued for eight and a half years. The CCP authorities still continue to persecute the practitioners who believe in 'Truthfulness-Compassion-Forbearance.'

Mr. Wang, another practitioner, said that when he saw a handicapped Fin in a wheelchair come to sign the petition of support on his own initiative, he heard a woman with him ask, "What is this?" The man in the wheelchair explained to her, "This is Falun Gong; this is a group of people who have their own beliefs but are persecuted by the CCP regime, just like Hitler killed the Jews during World War II." After she heard this, the woman also went forward and signed the petition.

“My Recent Improvement from Looking Within Unconditionally”

“Colorado: Mayor of the City of Aurora Congratulates and Recognizes New Tang Dynasty Television and Divine Performing Arts on the Occasion of the Chinese New Year Spectacular”