Using Our Abilities to Clarify the Facts (Photos)

Ms. Chen has practiced Falun Gong for nine years. In 1998, when she visited her parents, her brother told her that there was a wonderful book called Zhuan Falun. Since then, she's been practicing Falun Gong. She was a nurse before retirement. She explains the facts of Falun Gong at tourist attractions in Taiwan and Hong Kong and also makes phone calls to stop the CCP's persecution of Falun Gong. Since Hong Kong's sovereignty was handed over to China, many mainland Chinese people began visiting Hong Kong, providing an opportunity for truth-clarification. In the process of these activities, Ms. Chen also got rid of many attachments. Broadening her compassion, she does her best to awaken the sentient beings' kindness and let them know the truth.

Whether people want to quit the CCP or not also tested her compassion. She said she faced various challenges when explaining the facts to people face-to-face. One needs to have compassion when people are rude or do not want to listen.

Renowned Taiwan producer Chen Chun-tian is the director of the program. Ms. Chen was selected to play the part of a policewoman in the program and her performance was outstanding.

Ms. Chen said, "I heard that an actress was needed in a program exposing the CCP's persecution of Falun Gong practitioners. So I decided to participate if I was needed, since I have some experience in theater." 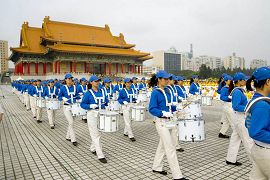 Ms. Chen has a son and a daughter. Her daughter, Miss Su, also practices Falun Gong and is a host for NTDTV. She is also a reporter for NTDTV and a drummer in the Divine Land Marching Band. 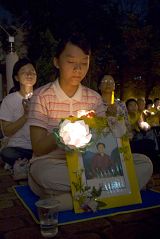 On July 21, a candlelight vigil was held in Chenghe No. 4 Park in Taipei. Miss Su introduced western practitioners that had joined the event: "Besides participating in our July 20 activities, they have come to Taiwan to participate in NTDTV's program preparation and to learn Chinese." Albert Roman, a high school teacher from the U.S., said that he is learning Chinese so that he may read Zhuan Falun in Chinese.

Albert said he started practicing Falun Gong in 1999 when he was teaching in China. After practicing, he has become more patient with others and has enjoyed good health without any illness for the past eight years.

Albert went to Tiananmen Square to unfurl banners with 84 other Falun Gong practitioners from other countries on February 14, 2002. He said he wanted the Chinese government to know that the whole world paid attention to Falun Gong.

At 2 p.m. on that afternoon they gathered on Tiananmen Square. Albert took a banner that read "Truth-Compassion-Forbearance" from his pocket and shouted "Falun Dafa is good!" in Chinese.  Four or five police snatched his banner and pinned him down on the ground while pinching his neck. The police beat his lower back while forcing him into a police vehicle. The police grabbed several other western practitioners nearby and threw them onto the ground.

Later, they were detained in a small room. Albert said they did not accept food from the police. His wallet, passport, and Falun Gong books were taken away. The next morning they were taken to the airport and forcefully deported.

The CCP's persecution of Falun Gong has lasted eight years. Albert says that whole world will know of the CCP's brutal persecution sooner or later. He said that no matter how the CCP attempts to hide the facts, they will be exposed and the CCP will definitely collapse.

To let more people know about the persecution, Albert regularly goes to the airport in California to explain the facts to passengers on flights to Beijing and distributes truth-clarification literature. On every Monday, he goes to the beach and sets up posters to expose the CCP's atrocity of organ harvesting from living Falun Gong practitioners.

“My Path of Cultivation During Fa-Rectification”