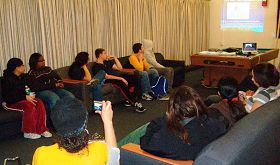 The practitioners gave a presentation with a projector. They presented background information about Falun Gong and introduced the book "Zhuan Falun." They showed pictures of practitioners around the world doing the Falun Gong exercises and pictures exposing the eight-year persecution in Mainland China. They also explained how the chief perpetrator Jiang Zemin and the evil CCP launched the persecution of Falun Gong.

The students asked questions with great enthusiasm. Those from State University of New York at Stony Brook invited Falun Gong practitioners to hold a major anti-torture exhibition at their university next spring.

“Letting Go of Attachments and Harmonizing the Family”