The first Caribbean Falun Dafa Cultivation Experience Sharing Conference in French was held in Guadeloupe on November 4, 2007. The location was the Eclaireurs de France building in St. François. Practitioners from the Caribbean Island of Martinique also attended the conference. 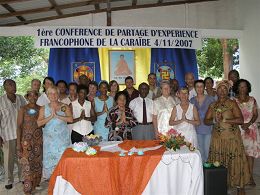 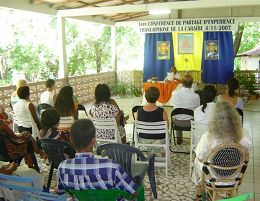 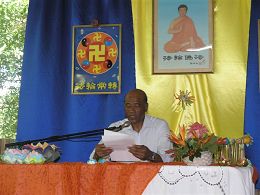 A practitioner presents a paper at the experience sharing conference

On Thursday and Friday before the experience sharing conference, practitioners held group Fa-study and practiced the Falun Gong exercises. On Saturday November 3, practitioners went to Basse-Terre for a parade, passing by the Baillif Town Hall on the way. Wherever the practitioners went they distributed flyers and newspapers to people, and explained the facts about the persecution of innocent Falun Gong practitioners in China by the Chinese Communist Party. 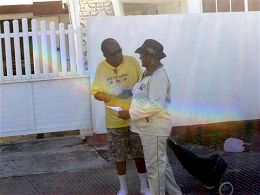 A practitioner talks about Falun Gong to a city government official 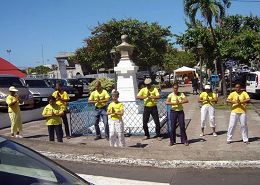 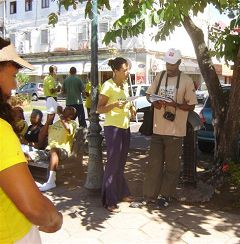 Before and after the conference, practitioners held group practice at nearby scenic sites and explained the fact to tourists 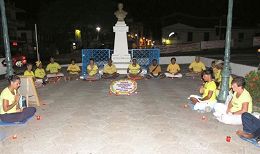 The parade ended in front of the Basse-Terre Town Hall, where practitioners had already set up a display about Falun Gong. When the Mayor's car passed by the display, he came out specifically to tell the practitioners that they were welcome to go to another part of town where there are more tourists and people. The practitioners thanked the Mayor and moved their displays. Next, they demonstrated the five sets of exercises, and clarified the truth of the persecution to passersby and drivers. A local journalist interviewed the practitioners.

In the evening, practitioners held a candlelight vigil at Victor Schoelcher Square. Victor Schoelcher is a famous historical figure, who once contributed to the abolition of slavery in the Caribbean. The square is in front of the Basse-Terre Town Hall, and the vigil commemorated the innocent Falun Gong practitioners who were tortured to death by the Chinese Communist Party for their belief in "Truthfulness-Compassion-Tolerance" in China.