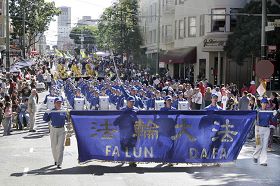 Don Caspar, of the parade committee, said that the participation of Falun Gong practitioners brought fresh splendor to the whole parade 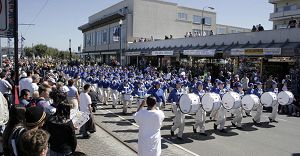 The annual Columbus Day Parade attracts around 400,000 spectators each year. Community groups of every culture, the Mayor, councilors, all sorts of beauty contestants, and celebrities won't miss the opportunity to see and be seen amidst the crowds in the still warm early autumn sun.

Even though Falun Gong has been persecuted and slandered in China for eight years, many Chinese countrymen attending the Columbus Day Parade couldn't help but take many photos of the spectacular energy the Falun Gong participants displayed - a scene temporarily impossible to see in mainland China.

The Western US Divine Land Marching Band took the lead of the Falun Gong contingent, performing "Falun Dafa is Good", "Delivering Precious Gifts" and other music. Their near-perfect and orderly formation and their clear and strong performance was a standout in the parade. Wherever they arrived, people applauded and waved; some danced along to the bright rhythm and some kept busy filming or taking photos.

When the persecution of Falun Gong practitioners in China was brought up, Casper said, "Freedom of belief is a universal human right, it is wrong for any country to suppress freedom of belief".

Another parade committee member, Steve, said that he is very happy to see Falun Gong practitioners in every year's Columbus parade. He said every group in the parade represents different cultures and beliefs. He supports freedom of belief, and felt sad about the persecution in China.

Bay area resident Jessica was happy to see Falun Gong practitioners in the parade. She felt the Falun Gong entry was extremely beautiful. After she learned about the persecution of Falun Gong in China, she said the persecution is absolutely wrong, they should not let it happen, China should allow freedom of belief.

“The Miraculous Transformation of My Sister's Family”