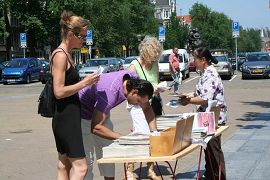 On July 1, 2006, the Global Service Center for Quitting the Chinese Communist Party in Amsterdam, Holland, along with Falun Gong practitioners, held activities in Chinatown to support 11 million withdrawals from the Chinese Communist Party (CCP), and to expose the CCP's harvesting and selling of organs taken from living Falun Gong practitioners for huge profit. Photos and posters exposing the CCP's persecution were also set up at the site to appeal to all circles in society to join together to stop the CCP's savage atrocities.

The eye-catching banners attracted many shoppers and tourists. People stopped to look at them and were astonished by the CCP's brutal crimes. They couldn't believe that worse things than what happened even in World War II are happening in China. After learning the facts, many people signed the petition calling on Holland's government to help stop these crimes.

After viewing the truth-clarification photos, one woman told a practitioner her thoughts: "Their [the Falun Gong practitioners who are persecuted] distress is the sadness of each of us. I believe every kind person is willing to lend a hand to help them. We also know the CCP is very evil, and they can't conceal the fact that they are gangsters in front of the whole world."

A Chinese person from China said with deep emotion, "There's no law in mainland China. It's even difficult to be a good person. The CCP is close to collapsing. Who still believes in it? It brings only discredit to China."

“Sweden: Exposing the CCP's Crimes of Harvesting Organs from Living People during the Tallberg Forum (Photos)”