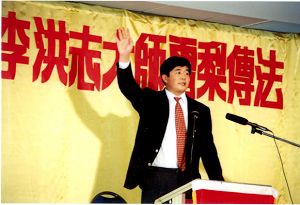 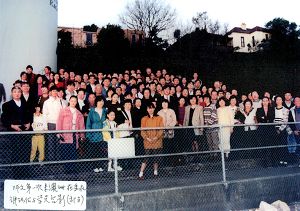 Teacher in photo with some practitioners after the Sydney lecture

On August 2, 1996, several dozen Australian practitioners arrived at the Sydney Airport to welcome Teacher. This was Teacher's first trip to Australia, so the practitioners brought with them fresh flower bouquets and flower baskets. Some had attended Teacher's lectures in China, Paris and Sweden before, while others had only just started practicing Falun Gong.

Practitioners watched the terminal exit with eager expectations. A tall person with sparkling eyes appeared in the crowd. A veteran practitioner happily remarked, "That's Teacher." Following Teacher were Teacher's wife and daughter, and both were graceful and elegant. Practitioners went up to them and greeted Teacher and his wife. They were so delighted to see Teacher they forgot to present him the bouquets and baskets.

On their way back home, practitioners noticed that the moon was very bright and round that night. They did not talk, trying to savor the precious moment quietly.

The next day, at around 8:00 a.m. on August 3, several practitioners brought Teacher to the conference site. Practitioners greeted Teacher with warm applause, after which Teacher walked up to the podium and began his first lecture in Australia.

Using simple yet vivid language, Teacher taught practitioners broad and profound Fa principles of the universe. Practitioners listened with respect. Aside from Teacher's voice, the conference room was very quiet. Teacher's loud and kind voice and his benevolent face left a lasting impression in practitioners' hearts.

This lecture was later published as Lecture in Sydney.

Teacher did not sit during the lecture. Neither did he drink any water. The coordinator invited Teacher to sit down and drink several times, but Teacher said, "I'll stand so people in the back can see me." The conference room was rectangular, and there were over 300 people in the room. Teacher stood for more than 5 hours. He only sat down for a few minutes during the intermission and had a little bit of water. The practitioners there were deeply moved.

“Exposing the Mistakes I Was Afraid to Let People Know about and Eliminating Fear, Part I”