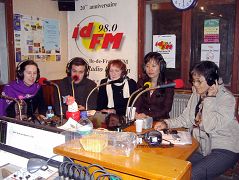 Id98.0 FM Radio Station of France broadcasts to the major area of France 24 hours a day. Falun Gong practitioners Manjing Chen, Candice and Ying Chen exposed the crimes of the CCP having removed organs from live Falun Gong practitioners for profits and then burning the bodies to eliminate the evidence, to the French audience in the one-hour program, "Just Talking," which broadcast live.

Ying Chen spoke of how she was detained three times without going through any legal formalities. Every time she was locked up, her family members did not know where she was detained. At that time, she was taken to a hospital to have her blood extracted and her body examined because she did not tell them her name. She said, "It is too difficult for us to imagine how cruel the CCP is, and its wicked, cruel actions. This devil in human form is killing and consuming people. I never thought that those Falun Gong practitioners who refused to reveal their names would face the fate of having their organs removed while they were still alive, and afterwards being burned."

Ying Chen said, "Now I remember that policemen and some other prisoners did tell us then that, 'If you continue practicing and still don't tell us your names, we will banish you to a desert, or a far-away, desolated and uninhabited place where you will be isolated and never return. We will let you practice until you feel that is enough. Don't be stubborn, or you will be taken to that horrible place.' At that time, police in detention centers and other prisoners were saying that the CCP was building some bases (concentration camps) in Xinjiang, Hebei and in the Northeast especially for locking up Falun Gong practitioners.

After the one-hour program ended, the hostess hoped that they would continue to tell the facts about Falun Gong to the audience of France in the program "Forum of Freedom" hosted by her at 12:00 noon and 6:00 a.m. Falun Gong practitioners Manjing Chen, Candice and Ying Chen explained why the CCP has been persecuting Falun Gong. The program was broadcast live and listeners called in via telephone. Many audience members telephoned to ask questions and show their concern and support for Falun Gong after listening to the broadcast. Some of the callers said that they listened to the Falun Gong practitioners tell the characteristics of Falun Gong and expose the CCP's cruel persecution of Falun Gong from the beginning to the end.

“How Practitioner Wang Xiuyun Was Persecuted to Death”