At 10:30 am on April 27, Malaysian Falun Gong practitioners delivered an appeal letter to the U.S. Embassy, calling on the U.S. Government to drop its charges against Ms. Wenyi Wang, who made an unusual appeal during Bush and Hu's meeting at the White House. After delivering the letter, the practitioners held a press conference to explain the urgent situation behind Ms. Wang's unusual appeal-the CCP is harvesting organs from living Falun Gong practitioners in China and is speeding up a slaughter in order to destroy evidence. 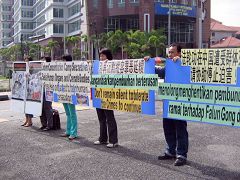 After delivering the appeal letter, dozens of Falun Gong practitioners held a press conference to inform the public woith details of Ms. Wang's appeal. Practitioner Xufeng Zhang told the public that Ms. Wang had visited many media, government agencies and NGOs before her unusual appeal. However, facing such an urgent situation in which the CCP is speeding up a slaughter in order to destroy evidence of its atrocities, the international community hadn't paid serious attention to this important issue. She thus cried out in order to save practitioners in China,

Zhang said: "While doctors' job is to save lives, a large number of investigations have revealed that Chinese doctors are killing people for organs. Ms. Wang felt very sad. Her unusual appeal was to raise international community's attention to this slaughter and this is an outcry of one's conscience.

"We sincerely appeal to the U.S. Government. We hope that the Bush administration will drop its charges against Ms. Wang and help us to end the genocide in China and rescue practitioners who facing killing at any moment."

Malaysian Falun Gong practitioners also introduced Ms. Wang's case to Malaysian police and media outlets. They hope that Malaysians will also break their silence and help end the CCP's atrocities. The U.S. Embassy told practitioners that they would write a report to the practitioners after the Embassy learned more about the case.