New York: On April 25, A Rally Was Held in Front of the Chinese Consulate to Condemn the Seven Years of Mass Killing by the CCP (Photos)

(Clearwisdom.net) On the seventh anniversary of the April 25 Peaceful Appeal, Falun Gong practitioners in New York held a rally in front of the Chinese Consulate at dusk, reminiscing about the 10,000 people's peaceful appeal on April 25, 1999 and condemning the Chinese Communist regime's (CCP) seven-year brutal persecution. 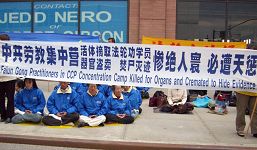 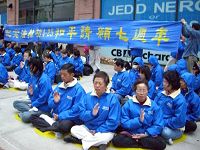 Protest in front of the Chinese Consulate

A huge banner reading "In Commemoration of the Seventh Anniversary of the April 25 Falun Gong's Peaceful Appeal" was in the center, and banners reading "Falun Dafa" and "Truthfulness-Compassion-Forbearance" in both English and Chinese were held on two sides of the huge banner. Also very eye-catching was a banner reading, "Falun Gong Practitioners in CCP Concentration Camps Killed for Organs and Cremated to Hide Evidence, Extremely Cruel, Heaven Will Punish This Atrocity" in both Chinese and English and a series of display boards in both Chinese and English entitled, "Help Stop the CCP Forced Labor Camps Harvesting Organs from Living Falun Gong Practitioners."

Ms. Zhang, who participated in the April 25 Peaceful Appeal, said that on that day, at 8:00 a.m. practitioners quietly stood outside the appeals office until the evening when the representatives of practitioners came out from negotiating, and everybody dispersed. During the day, nobody sat, everyone stood. For over twelve hours, we cooperated with the police' arrangement, peacefully and rationally. I have gone through the Great Culture Revolution, I have seen the CCP being brutal and violent. But I never expected that the CCP to be so evil, to remove organs from living Falun Gong practitioners and cremate their bodies to destroy the evidence. We have struggled arduously for seven years, and we have become more and more mature. I believe that we will walk the remaining journey even more steadily.

Ms. Jin also participated in the April 25 Peaceful Appeal. She said that at the time, she stood at an intersection to keep order. Everybody stood there in good order and very peacefully. Many people did not know each other, everyone stood in silence. In the past seven-years of resistance to the persecution, we have been peaceful, rational and non-violent. In the past seven years, only demons could do such atrocious deeds as the CCP has done in the persecution of Falun Gong, especially regarding the recent revelation of the CCP's organ harvesting from live Falun Gong practitioners and cremating their bodies to destroy the evidence. Such atrocities are still going on in all forced labor camps and prisons, and the CCP is hastening to destroy the evidence. I call on all kind-hearted people to step forward to stop the persecution.

Mu Xiangjie, a UN refugee who was just arranged to come to the US, is from Tianjin. She experienced the Tianjin incident at the time. She said, "He Zuoxiu published an article in the magazine, 'Extensive Reading of Science and Technology for Teenagers' to slander Falun Gong. In the face of this kind of slander and defamation, Tianjin Falun Gong practitioners went to the Education Institute to explain the true situation. The Tianjin authorities mobilized riot police to come to beat the practitioners." Mu Xiangjie said, "I remember it clearly. While a six-year-old practitioner stood there while reading 'Lun Yu,' a policeman struck him hard. But later, they said they did not beat anybody."

An American doctor made a speech, "My fellow practitioners, our actions are so noble and dignified, carrying great importance. In the face of CCP's seven-year-long inhuman persecution, we have been persistent in 'Truthfulness-Compassion-Forbearance,' and have established an everlasting monument for humanity. The CCP will go to its demise while committing demonic crimes. I believe that more and more people from all walks of life will pay attention to the crime of harvesting organs from living Falun Gong practitioners and cremating their bodies to destroy the evidence, and will forever disdain the CCP."

Mr. Lin from the Sound of Hope radio station said that the Sound of Hope reporters made phone calls to hospitals in Mainland China and recorded some doctors' public acknowledgement of having a large organ bank for transplant surgeries, and most organ suppliers are Falun Gong practitioners. Mr. Lin called upon more people who have learned the truth to step forward to expose the barbaric acts and stop the mass killing that is still happening.