(Clearwisdom.net) Eighty-one US Congressmen co-signed a letter to US President Bush to express their serious concerns over charges of CCP illegal organ harvesting from Falun Gong practitioners. The letter has delivered to the White House.

The eighty-one congressmen told Bush that it is important for the US to express its position on this issue and look into these charges. Exposing the truth about this incident may help rescue millions of innocent lives.

Prior to this, Congressman Dana Rohrabacher, chairman of Subcommittee on Oversight and Investigation, Committee on the House International Relations drafted a joint letter, requesting President Bush to express America's strong wish to have a full investigation of these charges of illegal harvesting organs from Falun Gong practitioners and cremating their bodies to destroy the evidence, and demand an explanation from Chinese leader Hu Jintao on the atrocities. 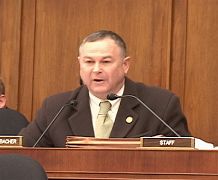 Congressman Dana Rohrabacher, chairman of Subcommittee on Oversight and Investigation, Committee on the House International Relations

Rohrabacher pointed out in the joint letter, "We as legislators, as statesmen and Americans, must not also become complicit in these crimes by keeping silent. History cares not whether we inked another trade deal or helped sell another Boeing 747, but history will judge us if we choose to look the other way when faced with truly indescribable human suffering on this scale."

Letter to my colleagues in the Congress

Every once in a while an issue presents itself that we cannot ignore. Recent charges that Chinese authorities may be harvesting organs, without consent, from living human beings, from prisoners of conscience, is one of those issues.

Witnesses say captive Falun Gong adherents are shipped in sealed freight trains to secret concentration camp-like facilities that are staffed by surgeons and equipped with crematoriums to dispose of the corpses and other evidence. One military doctor reports: "I witnessed a specially-dispatched freight train transferring over 7,000 people in a trip from Tianjin City to the Jilin area. It ran at night, guarded by Chinese soldiers. Everyone on board was handcuffed to specially designed handrails atop the ceiling..."

He says there are about 36 such camps in China with the three largest in the northeastern provinces of Heilongjiang, Jilin, and Liaoning. The largest camp, codenamed "672-S," is said to hold over 120,000 people, including Falun Gong and other prisoners of conscience.

A former staff member of the "Liaoning Thrombus Treatment Center of Integrated Chinese and Western Medicine" in the Sujiatun District of Shenyang City in Liaoning Province recounts that, at one point, about 6,000 Falun Gong practitioners were being held in secret in the facility. She estimates that three-quarters of them eventually had their hearts, kidneys, corneas, and skins harvested and their bodies disposed of. As for the rest, she fears the authorities will soon kill them to destroy the evidence.

Her husband at the time was a neurosurgeon whose job it was to harvest corneas. The doctors were told that harvesting the organs of live Falun Gong practitioners would not be considered a crime. Instead it was called "cleansing" for the sake of the Chinese Communist Party. "You don't understand my suffering," she recalls him telling her. "Those Falun Gong practitioners were alive. It might be easier for me if they were dead, but they were alive." Both witnesses have since left China, fearing for their own lives.

The reporter for Japanese television who first broke this story says Falun Gong practitioners are seen as a prime source of organs because of their nearly limitless supply-as many as two million are said to be currently held in China's vast system of labor camps and prisons. "They [CCP authorities] can't find enough bodies through executions, and no bodies are more readily available for this business than those of the practitioners," he explained. For other kinds of prisoners, even those on death row, organ removal would be difficult to take place without the proper paperwork. But due to the CCP's policy that the deaths of Falun Gong practitioners "count as suicide" and family members are usually not notified, hospitals remove their organs and cremate their bodies without any formal procedure or documentation.

This may be the grisly reason why there is no waiting list for human organs in the PRC. The website for the just one transplant center, the Oriental Organ Transplantation Center in Tianjin (www.ootc.net), says they "completed 2,248 cases of liver transplants in 2005." A graph of their "achievements" shows the number of procedures growing by leaps and bounds after 1999, the year the persecution of Falun Gong officially began.

The website for the China International Transplantation Network Assistance Center, some sort of quasi-governmental entity based in Shenyang, http://en.zoukiishoku.com, boasts in its FAQ: "It may take only one week to find out the suitable donor, the maximum time being one month because the kidney transplant needs to find a HLA tissue match...Our organs do not come from brain death victims because the state of the organ may not be good." Since the preservation time for a kidney for transplantation is only about 24 to 48 hours, such claims point to some sort of readily accessible source of fresh bodies, either newly killed or perhaps still alive at time of harvest. In general, organs that come from living bodies can command higher prices.

"There are more than 35,000 kidney transplant operations that have been done in public hospitals in 29 cities, provinces and municipalities in China, and the number of kidney transplant operations is at least 5,000 every year all over the country. So many transplantation operations are owing to the support of the Chinese government. The Supreme Demotic Court, Supreme Demotic Law-officer, Police, Judiciary, Department of Health and Civil Administration have enacted a law together to make sure that organ donations are supported by the government. This is unique in the world."

The kind of moral complicity required for the non-consensual removal and sale of human organs is certainly unique. We as legislators, as statesmen and Americans, must not also become complicit in these crimes by keeping silent. History cares not whether we inked another trade deal or helped sell another Boeing 747, but history will judge us if we choose to look the other way when faced with truly indescribable human suffering on this scale.

We have a responsibility to have our President express America's strong wish to have a full investigation of these charges and demand an explanation from Chinese leader Hu Jintao during his upcoming visit and an agreement to allow on-site third-party investigations. I think you will agree this is the least we can do.

“CBS: Not Getting The Whole Story In China”