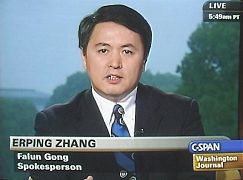 On April 22, spokesperson for Falun Gong Erping Zhang accepted an interview by C-Span TV station. During 30-minute interview, Erping Zhang answered questions on the Falun Gong issues that the American people are concerned about. C-Span broadcast live the program, and opened hotlines for the audience.

(Clearwisdom.net) Dr. Wenyi Wang shouted cries to "stop the persecution of Falun Gong" on April 20, 2006 on the lawns of the White House in the presence of President Bush and visiting Chinese president Hu Jintao. American society has showed great interest in Falun Gong since. At 8:30 a.m. on April 22, 2006, spokesperson for Falun Gong Erping Zhang accepted an interview by the C-Span TV station. During the 30-minute live TV interview, Mr. Zhang answered many questions about, "What is Falun Gong," "The CCP harvests organs from living Falun Gong practitioners," "Persecution that Falun Gong practitioners have been suffering in China," and other questions. C-Span broadcast live the interview show to the audience throughout the US and opened hotlines for the audience. 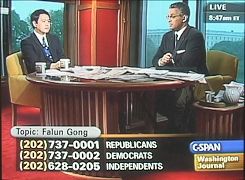 C-Span is a non-profit corporation established for the public good in the US. The characteristic of this famous television station is that it does not edit, nor add asides or comments. It is devoted to providing the audience with the whole picture of the events and interviewee's opinions without being filtered by the media. It is an important channel for the American people to learn about many things.

Moreover, many American people urged the American government to stop the CCP's atrocities via sending emails, making phone calls or sending fax to the White House. They also showed concern over the situation of Dr. Wang Wenyi.

The story of Wenyi Wang

At request of the host, Erping Zhang discussed Wenyi Wang's shouted appeals [for Falun Gong] at the White House. He said, "Ms. Wenyi Wang is a medical doctor, and the chief editor of a Chinese Medical Journal issued in North America. She graduated from Bethune University of Medicine in Changchun City, Jilin Province, China. She later received a PhD of Neurology from the University of Chicago. She is a practicing physician at Mount Sinai Hospital in New York City.

Dr. Wenyi Wang is very concerned about the organ harvesting from prisoners of conscience in China, especially atrocities of harvesting organs from living Falun Gong practitioners. Dr. Wenyi Wang has been doing investigative research in this aspect in the past five months.

Not long ago, two witnesses came to America and revealed that thousand of people detained only in one hospital in Sujiatun have been killed, but such atrocities not only occurred in one location. According to a retired military doctor, there are 36 similar facilities throughout China. The American media have reported on the CCP's live organ harvesting. The US Congress also held a hearing on this, so it has no reason that the American government not to address the issue to the visiting Chinese leader and to the press.

She was very disturbed that the Chinese government did not look into this, nor did the international media. The governments around the world also did not make any public response regarding the issue. As a reporter, she openly shouted for people's concern over this atrocity of live organ harvesting. She wanted to send a message to the world and the governments: when the large-scale harvesting of organs from living Falun Gong practitioners is taking place in China, we should not ignore and do nothing.

Erping Zhang said that her action was only to save more people's lives.

The scenes of Wenyi Wang shouting her appeals in the White House played on C-Span reminded many American people of Ms. Rosa Parks, who refused to give up her seat to a white man on a bus, and Dr. Martin Luther King, famous American civil rights activist. Their acts many years ago breached local laws, but their sacrifices won rights for more people.

Members of the audience called in from Florida, Illinois, Maryland, New York and Washington and other places to express their admiration for Dr. Wenyi Wang's courageous act and incredible courage

Charges are quite ironic

When being asked if Wenyi Wang was charged, Erping Zhang said, "Wenyi Wang received a misdemeanor charge. The charge is, "intimidating, coercing, threatening, and harassing the Chinese leader." He pointed out that the charge is quite ironic.

Erping Zhang asked how this 47-year-old petite looking woman, and a medical doctor, the mother of two children, intimidated the CCP leader who commands four million soldiers in the army and is under the constant protection of bodyguards. It should be just reverse. The CCP government is intimidating, coercing and harassing the Chinese people. This is what is going on right now.

Erping Zhang said that he was very impressed by an editorial entitled, "Overreacting to Protest" in the Washington Post. The editorial says that if Ms. Wang's act happened in Beijing, six-month imprisonment may be the way Beijing would handle it, but it happened in Washington DC, and the American government should not do so. It is against the first amendment of the freedom of speech. And the charge is groundless, her act might have humiliated the CCP leader, but not "intimidate, coerce and harass him."

Erping Zhang said, Ms. Wenyi Wang will have a preliminary hearing on May 3, it happens to be the United Nations' "World Press Freedom Day."

Erping Zhang said many lawyers expressed their support for Wenyi Wang. He hoped the American government to dismiss the charges against Wenyi Wang.

Erping Zhang said that the American government can apologize to the Chinese government for a diplomatic protocol, but not in such a way to put a journalist into jail. 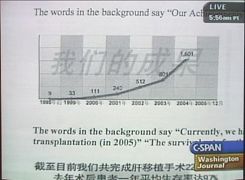 Erping Zhang shows a Chinese website to the audience during the show. The website says they "completed 2,200 cases of organ transplants in 2005" in only one hospital since 1999, the year the persecution of Falun Gong officially began.

An audience member from Maryland said on the phone that in the past years, whenever someone went to China to investigate labor camps and other facilities, what they saw were all fake. The CCP government has spent a lot of time making false images, decorating the labor camps to look very beautiful. The prisoners have their English names branded on their clothes, and little deer were running peacefully in labor camps. But harvesting organs is a very serious issue, how can we get the facts out?

Erping Zhang said, this is why the Falun Gong practitioners have set up the Coalition to Investigate the Persecution of Falun Gong in China (CIPFG). Recently, the American government sent some diplomats to Sujiatun hospital to look into the organ harvesting incident. But it took place over two weeks after the revelation of the news. Accompanied by the hospital authorities, they toured the hospital and did not find any evidence.

Erping Zhang said if the CCP allows people to visit this hospital, why can't it open up all hospitals, forced labor camps, prisons and organ transplantation centers?

Erping Zhang pointed out that this is a crime against humanity, an issue affronts all individuals, and all the people living in the free world. It also affronts our basic value of freedom and human dignity. Erping Zhang called upon the international organizations and governments around the world to join the CIPFG, and conduct an independent investigation into all forced labor camps in China.

Falun Gong practitioners are being persecuted

Erping Zhang said, a friend of his father, a renowned professor of physics in China, was sentenced to three years of forced labor and brutally beaten for refusing to renounce Falun Gong. Her daughter, a professor of biology at an university in America is trying all means to rescue her. This is only one of the countless cases of the persecution. According to human rights groups' investigation report, there are over 3,000 Falun Gong practitioners who have died as a result of the persecution. Several hundred thousand Falun Gong practitioners have been incarcerated in forced labor camps, prisons and mental hospitals, going through great tragedy and inhuman persecution.

The CCP exports the persecution to America

Erping Zhang said, it has been documented that many Falun Gong practitioners have been subjected to the CCP's threats and coerce in the US. He personally received two death threats from someone who left messages on his cell phone.

Erping Zhang said we hope the American government to speak out to the CCP leader: not to come to America to intimidate and coerce the freedom of American people.

Erping Zhang said when answering the question during the show, since the introduction of Falun Gong in 1992, the Chinese government endorsed Falun Gong until 1999, when the CCP found that there were so many people practicing Falun Gong, about 100 million, that they outnumbered CCP membership, so the CCP was scared and decided to crack down on Falun Gong.

Erping Zhang said Falun Gong is only a cultivation group, but not a political group. Everyone practices on their own free will. What we are trying to do is rescuing Falun Gong practitioners being persecuted in China.

An audience member from New York asked how to learn Falun Gong. The C-Span played the scene of the website of the Falun Dafa Information Center on the screen.

Method to download: click left key on the mouse, select "Save target as..." from the menu popped up.

“UK: Parade and Rally Protesting the Persecution is Held in London before the Seventh Anniversary of the "April 25th Peaceful Appeal" (Photos)”