On December 3, 2006, the Taiwan Falun Dafa Experience Sharing Conference was held in Hsinchuang Stadium, Taipei County. Practitioners shared their experiences of cultivation and understanding of the Fa. 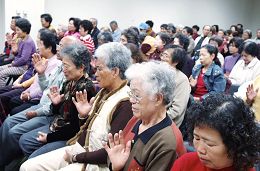 Practitioners send forth righteous thoughts at the conference 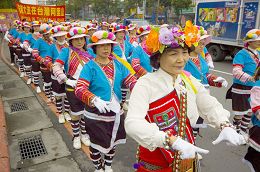 A conference room was set up for the speakers, many of whom were older men and women. They cannot read or speak Mandarin, but they solidly cultivate Falun Gong and have witnessed many miracles.

67-year-old Li Tongching has been cultivating for five years. He formerly had many ailments, including bone spur, diabetes, and cataracts, before he began cultivation practice. His wife improved her health through practicing Falun Gong. But he, a very stubborn person, did not believe that Falun Gong could heal the problems that even doctors could not heal. So he did not cultivate until one of his neighbors, who was even more stubborn than him, invited him to practice together.

Since Mr. Li was illiterate, in the beginning he just did the exercises. Practitioners told him that Falun Dafa cultivates one's body and spirit, so as a cultivator, he should read the Fa. Mr. Li then made up his mind to learn Chinese. He has now learned a lot of Chinese characters and can read most of Zhuan Falun. He said that sometimes he can even point out other practitioners' mistakes while reading.

Mr. Li said that a lot of changes happened to his body after he started reading the Fa. Due to the elimination of karma, he had to lie in bed for a whole month. But he didn't feel pain or scared. His mind was solid, and soon all of his diseases were healed.

Mr. Li said that he has not had to go to the hospital since he started practicing Falun Gong. Sometimes the nurses asked him to do a physical examination, but he thought that since his health is improved, he should no longer waste the public resources.

But the nurses kept calling him this year, saying, "We are worried about you, since you had so many diseases before." He realized that he should do a physical examination so that the nurses and doctors could also witness the miracles that Falun Gong has brought to him. So he had a check-up, and everything was fine, which amazed the doctors and nurses. He also took this opportunity to clarify the truth of the persecution against Falun Gong.

Mr. Li said that the older practitioners cultivate very diligently. Older practitioners at his exercise site have arranged three time slots to study the Fa every day, with three hours for each slot. They also do the exercises every day. On Tuesday, they go to tourist spots to clarify the truth to tourists from Mainland China.

Although they are illiterate, these older men and women are very diligent in cultivation. Although they did not share their experiences on the stage, other practitioners appreciated their solid belief in Master and the Fa.