On November 28, 2006, at a routine public hearing held at the French Premier Office Building, the French National Human Rights Advisory Committee invited the two Canadian independent investigators, Mr. David Kilgour and Mr. David Matas, to testify about the crimes of the Chinese Communist Party's (CCP) harvesting organs from living Falun Gong practitioners. The president of the French Falun Dafa Association and a representatives from CIPFG (Coalition to Investigate the Persecution of Falun Gong in China) France delegation were also invited. 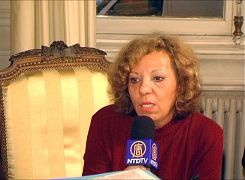 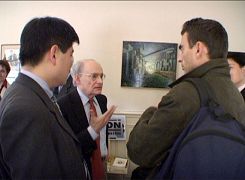 Mr. Matas talks to reporters from France 2 TV about the investigation of the CCP harvesting organs from living people 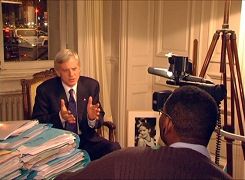 The French National Human Rights Advisory Committee is located inside the Premier Office Building and has the role of providing consultation about human rights to the French Premier's office. The public hearing on the evening of November 28 was chaired by Mr. Emmanuel Decaux, chairman of international affairs for the committee. Committee Secretary General Mr. Michel Forst, French human rights ambassador Mr. Michel Doucin, and several representatives from different member associations in the committee attended this hearing.

After the hearing, the two Canadian investigators held a press conference at the law office of attorney Mr. Orlandi to inform the media about their investigation and the public hearing at the French National Human Rights Advisory Committee.

The two Canadian investigators disclosed to the media that, at the public hearing, Mr. Matas first outlined the main points of the investigation report, and declared that the CCP's crimes of organ harvesting from living Falun Gong practitioners on a large scale did exist, and still continue. He suggested that the committee conduct its own investigations, suggest that the French government exert pressure on the Chinese authorities, and ask for an open and concrete dialogue at the highest level with the Chinese government regarding the allegations discussed in the investigation report. Matas also specifically suggested, in view of the fact of the severe violations of human rights, that the 2008 Olympic Games should be transferred from Beijing to Paris.

Afterwards, Mr. Kilgour talked to the media about the persecution of Falun Gong in China. He cited the strong approval of Falun Gong from the Canadian Governor-General and other senior politicians, praising the principle of "Truthfulness, Compassion, Forbearance" and its contributions towards the harmony of society.

At the press conference, Mr. David Matas said they suggested that the French government exert pressure on the Chinese government regarding the organ harvesting from living Falun Gong practitioners, and help stop the crimes of genocide and crimes against humanity happening in China. If there is any chance of dialogue with the Chinese government referring to this matter, three rules should be followed: First, the dialog must be public instead of in private; second, the dialogue must be at the topmost level rather than the grass-roots level; third, the dialog must be concrete rather than a superficial discussion.

He also indicated to the media that in view of the fact that the Chinese government has not only not fulfilled their promises on human rights, which they promised to while applying for the sponsorship of the Olympic Games, but the human rights conditions have instead worsened. They therefore suggested that the sponsor city of the 2008 Olympic Games be shifted to Paris, the city that was competing with Beijing for hosting the 2008 Olympic Games at that time.

At a joint interview with The Epoch Times, NTDTV and the Sound of Hope radio, lawyer Orlandi said, "What Falun Gong is upholding is traditional culture and traditional thought, yet the CCP regards it as a kind of threat to its political power. Falun Gong is strong in China, Falun Gong practitioners outnumber CCP members. The CCP is a dictatorship, and in order to eliminate perceived dissidents, the CCP [felt they] must annihilate Falun Gong. They now even use the method of organ harvesting to eliminate Falun Gong." He added, "The investigation report has just been submitted to the National Human Rights Advisory Committee. This report is based on confirmed facts. I think that France, as a human rights protector, should do something, even deny the 2008 Olympic Games in Beijing, as condemnation of this crime. My colleague Mr. Matas' suggestion is significant. The denial of the 2008 Beijing Olympic Games will impel the athletes to condemn this crime, tell them what is happening there, and inform them that we will not go to Beijing because human rights are trampled there. This report gives the full and accurate evidence. I think this is a very good action to take!"

As a human rights observer, Ms. Lamperti, president of the Action for Human Rights Association, also attended this hearing. She said that this public hearing indicates the French government's further concern about the persecution of Falun Gong in China and confirms the allegations of the CCP's organ harvesting from living persons. As a human rights organization, what they request is "not simply the Chinese government to release a few prisoners of conscience, as this can certainly not solve the problem because the whole of China is controlled by this kind of system. The 610 Office must be dissolved, lawyer Gao Zhisheng must be released and they must allow lawyers in China continue to uphold human rights and maintain human morality and justice."