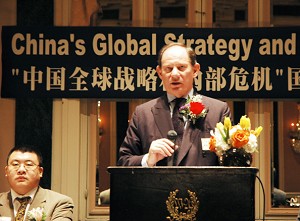 In the forum "China's Global Strategy and Inner Crisis" held last Friday, the movement to quit the Chinese Communist Party (CCP) emerged as the largest crisis facing the Chinese regime.

Also joining via an Internet-linkup was Jia Jia, the former Secretary General of the Science and Technology Experts Association of Shanxi. Jia is currently in Thailand under temporary refugee status, after defecting in Taiwan last month. He is still awaiting political asylum.

Jia spoke on "The Wave of Quitting the Communist Party," a topic he is familiar with as a former communist official, and the highest-ranking Chinese official so far to openly support the movement to quit the CCP while still at his post.

According to Jia, many officials are planning "escape routes" by sending their assets and family members overseas. "In mainland China," said Jia, "Anyone who can find a way to do so is trying to escape. They all say that the communist party is done for, and to escape now, or one day, the CCP may shut the door, and there will no longer be any escape."

Annette Guo, Editor-in-Chief of The Epoch Times, and democracy advocate Wei Jingsheng addressed the issue of how the Chinese regime's foreign policy is geared toward hiding its internal crisis. Guo said that the Chinese regime was using nationalism to distract its people, while Wei likened China's attitude toward North Korea to a "good guy/bad guy routine," in which China is using the North Korea nuclear situation to distract other countries into thinking it is "the good older brother."

Assemblyman Michael Benjamin had a similar point, which he referred to as the "double game" that the Chinese regime plays. "They have one thing they put forward to the public around the world with their propaganda, and the reality of life in China. We have to make sure the double game is revealed, [and] we can start with the 2008 Olympics."

European Parliament Vice-President Edward McMillan-Scott gave the keynote address of the forum, focusing on his experiences with human rights in China--specifically his secret meeting last May in Beijing to investigate the organ harvesting of Falun Gong practitioners by the CCP. McMillan-Scott also expressed his admiration for the courage of the people who have quit the CCP, and stated that the campaign should be supported by free governments around the world.

Likewise, Benjamin said, on the fact that 15 million have resigned from the Chinese Communist Party and affiliated organizations, "That's a resounding victory, that sends a notice that there are those who are willing to stand up and not be afraid, and to say, 'Enough is enough. We want democracy and we want to have our lives,' and they need to be respected."

The forum ended on a note of encouragement, but also one of warning.

"Everyone knows," said McMillan-Scott, "that the Chinese regime is coming to an end. I just say to the people in China who are guilty of crimes of genocide, such as harvesting organs from Falun Gong prisoners--we know your names. We know what you're doing... and you will be punished. This is the world of 2006 and beyond. It is a world of human rights and democracy, and a world in which the CCP has no place."