(Clearwisdom.net) On Sunday, November 12, 2006, practitioners in the Korean Divine Land Marching Band went to "China Street" in Incheon City on famous Wolmi Island. With volunteers from the Center for Quitting the Chinese Communist Party, they clarified the truth, passed out copies of the "Nine Commentaries on Communist Party", and exposed the CCP's crime of live organ harvesting from Falun Gong practitioners. 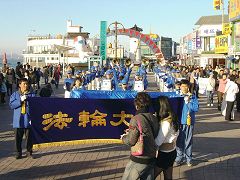 The Divine Land Marching Band's powerful performance had an almost magical effect. Many Chinese were at first surprised to see such a marching band and then praised the performance.

A man from Shandong Province in China had only been in Korea for seven days. After watching and listening to the band's performance, he was shocked and incredulous. A practitioner clarified truth to him. He said, "Now I understand why Chinese people always say, 'Everything on CCTV is fake except the Animal World program; everything in the People's Daily is fake except the date.' You are truly great!"

In the end, this honest man quit the CCP with a pen name and he said he would encourage his relatives and friends to quit the CCP, too.

Mr. Wang is a member of the Divine Land Marching Band. He said, "I performed here hoping to bring the beauty of Falun Dafa to everyone, to awaken people's consciences, to expose the Chinese Communist Party's lies and propaganda, and to help to stop the evil persecution of Falun Gong."

“Michigan: Spreading the Fa at the Mental and Physical Health Fair”