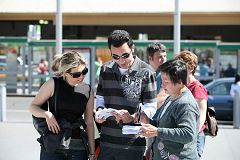 The practitioners distributed the Nine Commentaries on the Communist Party and fliers about the organ harvesting atrocities. When passers-by saw the Chinese Communist Party's (CCP) record of killing innocent Chinese citizens, they were shocked. Many stopped to talk. A westerner said that he just came back from China and had a pretty good impression. He said that he knew the regime had a bad human rights record in the past and thought it may have improved somewhat. However, upon learning the facts about the organ harvesting, he realized that the CCP is against humanity and the Chinese people are in a tragic situation. When he asked how he could help them, a practitioner handed him a petition form. He signed immediately.

A woman from China, Ms. Li, told the practitioners her personal experience: Her father was labeled as a "rightest", and her family was forced to go to the countryside. It happened during the so-called "natural disaster" period and there was not enough food for the family. She cried every day because of hunger and saw village cadres boil a baby for food. Ms. Li said that her sisters were all pretty and village cadres often went to their home to harass them at midnight. Even with such a terrible experience, because of the party's brainwashing education, she still thought that the CCP was good, though the village cadres were terrible. She even thought that it was her father's fault that the family suffered so much. Fortunately, she now realizes how evil the party is and that the party is the root of all evil and suffering in China.

A boy was very sad when he saw photos of practitioners who were tortured to death. He signed the petition and said that he would ask his friends to sign as well.

At Chinatown, which is nearby, volunteers for the Quitting CCP Service Center played the Nine Commentaries documentary using a big screen TV and distributed fliers. There were many Chinese tourists because it was a holiday season in China. An old man watched the documentary for a while and then said: "I joined the CCP when I was young and have gone through all kinds of political movements. I know its nature pretty well; it is really bad! It has done too many evil things!" He wrote down his name and asked the Service Center to help him to quit the CCP.

In the past, most people who signed practitioners' petitions were mainly westerners. Chinese people rarely dared to sign. However, with the spread of the Nine Commentaries, the shadow of the CCP's terror has been dissipated and people are gradually seeing the truth and gaining courage. After viewing the photos about the CCP's atrocities of harvesting organs, a passing-by Chinese international student said to her friend: "Let's sign the petition." There was a Chinese girl who learned the truth at the display site. She took a petition form and said to her friends: "I must sign this petition, you all should sign as well."

“Canadian Member of Parliament: Withdrawals from CCP Are the Solution for China (Photos)”