(Clearwisdom.net) Since the Chinese Communist Party’s (CCP) crime of harvesting organs from living Falun Gong practitioners was exposed, every Sunday since August 13, Falun Gong practitioners from Los Angeles have held activities at Santa Monica Beach, the famous tourist spot in Los Angeles, to re-enact the practice of organ harvesting and expose the CCP’s brutality. 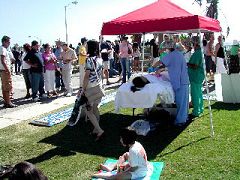 The CCP’s brutality shocks many tourists

Many tourists from all over the world were shocked by the re-enactments of organ harvesting. Many of them accepted the truth-clarifying materials, and talked to practitioners. Some tourists took photos, and reporters interviewed practitioners.

Once, two young men passed by the practitioner’s booth. They were shocked by the re-enactment. They asked, "Can you give us some flyers? We would like to help you pass them out. We must let more people know about such a brutal thing."

An older gentleman learned the reasons and the practitioners’ motivations for holding the activity at this location. He showed his respect to practitioners, and took a lot of photos of the event.

Many kind people signed their names on the petition and asked how they could help.

Some people cried in front of the truth-clarifying photos and the re-enactments.

As long as the persecution is going on, Falun Gong practitioners won’t stop clarifying the truth. They believe that more and more people will stand up and help stop the persecution together.

“Famous French Singer: "I support you with all my heart" (Photo)”