(Clearwisdom.net) The "Truthfulness-Compassion-Forbearance" International Art Exhibition visited Calgary from July 15 to 17. Visitors were impressed by the art works and were moved by the true stories behind the paintings.

This exhibition displayed nearly 40 paintings by outstanding practitioner-artists from around the world. It consists of five sections: "Enlightenment," "The Beauty of Cultivation," "Uncompromising Courage," "Calling for Justice," and "Justice Prevails." The paintings vividly depict the spread of Falun Dafa, the beauty that the practice has brought to practitioners, the uncompromising spirit of practitioners facing brutal persecution, and practitioners' great compassion demonstrated in their persistent truth-clarification efforts. The paintings also reveal the truth about the Chinese Communist Party's (CCP) brutal persecution of Falun Gong, as well as the unchangeable, universal principle of karmic retribution. 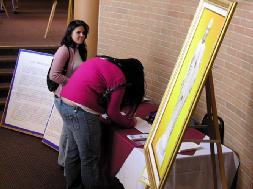 A visitor wrote down her thoughts after viewing the exhibition

With the melody of "Pudu" playing in the background, the visitors admired the paintings. While impressed by the beauty and serenity depicted by the images, they were moved by the true stories behind the paintings, as narrated by the practitioners who volunteered to act as hosts.

Now and then, one heard someone exclaiming, "So beautiful!" and "Amazing!" Some said, "I believe in the existence of other dimensions." Some visitors also showed an interest in learning the Falun Gong exercises and asked where they could learn them. There were also quite a few visitors who learned the exercises on the spot, in a corner of the exhibition hall. 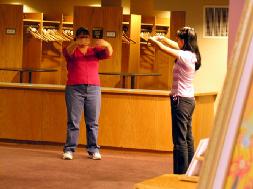 A visitor learning the Falun Gong exercises at the exhibition site

When visitors saw the paintings which depicted how practitioners are being persecuted in China, some cried. Many made comments such as, "How sad!" and, "Unbelievable." An elderly woman stayed at the exhibition for quite a while and wept several times. Before she left, she wrote that the exhibition was the answer to life and art.

There were also several Mainland Chinese tourists who came to the exhibition. Some said, "Though I don't practice Falun Gong, I believe that Falun Gong is good." Some said, "We don't believe the propaganda of the Mainland media. For example, the 'Tiananmen Self-immolation' incident reported by the media is apparently a fake." Many Chinese people also asked about issues which they didn't quite understand. After they got clear answers, they thanked the practitioners repeatedly.

It is worth mentioning that a middle-aged woman came back to the exhibition and told a practitioner, "China is experiencing such havoc now. What you are doing is great and you should continue!" This woman works at city hall and had visited the exhibition earlier.

After being shown in Calgary, the "Truthfulness-Compassion-Forbearance" International Art Exhibition will then visit Edmonton, the provincial capital of Alberta.