(Clearwisdom.net) Recently, scientists have discovered that the cosmos is experiencing unprecedented dramatic changes while other galaxies are separating from the Milky Way at an accelerating speed. They have also observed that many new celestial bodies have been born while a lot old ones dispersed. From ancient Chinese culture, it is said that the phenomena in the cosmos are connected to human world, that dramatic changes in the cosmos link to huge events in the human world. Indeed, many Chinese and Western books of prophecy have predicted that huge historic events will happen around this time.

It has been reported that many miracles and strange phenomena have happened recently, for example: On March 19, 2002, a Virgin Mary statue shed tears; in July 2002, a stone of Jerusalem's Western Wall (the Wailing Wall) started to steadily drip water; on January 17, 2003, tear stains emerged underneath of the right eye of a Bodhisattva Guanyin Statue in Kaohsiung of Taiwan, and the stains stayed intact even after several rain showers. Since the beginning of this year, several temples in Korea found Udumbara flowers on Buddha statues. According to Buddhist scriptures, these flowers blossom every 3000 years, coinciding with the time that the King of Falun comes to the human world to save people.

How one can make the right decisions at this crucial moment is a big issue for everyone. Let's look at a few cases in which kind-hearted people were benefited because they treated Falun Dafa positively. We hope that these true stories can bring the readers some insights. 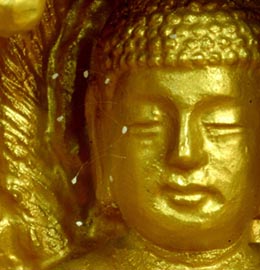 Ms. Ma Xiuqin, 71 years old, is from Chaoyang Town in Changtu County, Liaoning Province. She suffered from terminal lung cancer and in November 2004, her family was preparing her funeral.

One night after watching the DVDs, Ms. Ma vomited something that looked like fish intestines, which filled half a basin. She told her daughter who was by her side taking care of her, "This time I'm getting over it." Indeed, Ms. Ma then began to get better day by day.

Since then, she has gained a dozen pounds, and she looks healthier. She also walks energetically. Ms. Ma has been telling everyone, "It's Falun Dafa that has saved my life."

During the end of 2004 there were three leukemia patients being cared for in a room on the ninth floor of a cancer hospital in Dezhou City, Shandong Province. The patients' names were Fu Changyi of Huayuan Village in Wucheng County, Wang Hailiang of Xiaoxin Village, Dezhou City, and Mr. Shi of Xiajinsuliu Village. Fu Changyi is now 17 years old. On September 7, he was diagnosed with leukemia at a blood bank in Tianjin. After four months of medical treatment his hospital bill was 60,000 yuan. Even so, his condition got worse instead of better. Just when it looked like Fu Changyi was near death, a relative who had practiced Falun Gong for many years paid him a visit. The relative explained the facts about Falun Dafa to all the patients being cared for in Changyi's room, as well as the hospital staff. Three days later Fu Changyi was released from the hospital. His body had miraculously returned to normal. Wang Hailiang and Mr. Shi were also released soon after. These terminally ill patients personally experienced the miracle of Dafa. Fu Changyi can now perform the standing exercises.

A strange thing happened during the 2001 harvest season in a small village in northern Tangshan, Hebei Province.

After harvesting their own wheat, one family decided to burn the roots. They were very careful since they were afraid that other families' wheat might be set on fire, and watched its progress closely.

Suddenly a whirlwind came down close to the area where the wheat had not yet been harvested. The whirlwind fueled the flames and burned several acres of wheat. Amazingly, the wheat acreage next to this family was safe while the wheat field further away was burned. Peasants who were at the scene all said the incident was strange. Why was the land closest to the fire not affected while the crops further away were burned?

The daughter in-law of one of the families whose wheat was spared during the burning incident happened to be the cook for the police station at that time. She was quite sympathetic to the Dafa disciples and knew that they were all good people. Surreptitiously, she always gave food to Dafa disciples when the officials from the county weren't paying attention. Whenever she had an opportunity, she put more rice in the porridge to make it thicker.

Her behavior has brought her good fortune - not only to herself but also to her family. She did not have a child after being married for many years and had consulted many doctors, to no avail. After the summer of that year she got pregnant and gave birth to a healthy baby girl. This is truly a good reward for her kind treatment of Dafa disciples.

A local 610 Office supervisor in Liaoning Province had been following the Jiang regime closely in the persecution. He later developed severe hepatitis. Though he went to Beijing for a month for treatment and stayed at home for a long time, his disease didn't get any better. Later, he made a hard decision to quit his job at the "610 Office" after practitioners clarified the truth to him. Several months later, he recovered and several parameters of hepatitis returned to normal.

Fei Baoyin is a resident of Qinglong County, Hebei Province. Here is his story:

"My name is Fei Baoyin and I am in my 60's. I live in Qinglong County, Qinhuangdao City, Hebei Province. In the past, I was against Falun Dafa. I would say bad things about Falun Dafa whenever I met practitioners, and I would tear down truth-clarification messages whenever I saw them. Practitioners tried to talk to me many times, but I just turned a deaf ear to them. As a result, I invited karmic retribution and developed late-stage cancer. The hospital couldn't cure my cancer and all I could do is was go home and wait to die.

One day my daughter ran into a practitioner who told her that by chanting "Falun Dafa is good" and "Truth-Compassion-Forbearance are good," many patients had their illnesses cured. After returning home, my daughter told me what she learned from that practitioner. I thought to myself, "I have to die anyway. Why don't I just give it a try and see if Falun Gong can save my life." Therefore, I started to chant "Falun Dafa is good" and "Truth-Compassion-Forbearance is good" every day. I also helped practitioners post Dafa materials in hopes of making up for the loss I caused to Dafa. Soon a miracle happened. My cancer disappeared and I became very energetic. I can go shopping now. Moreover, I can do some work too. I know that it is Dafa and Teacher that saved my life.

I sincerely hope my fellow citizens come to learn the truth of Dafa. I advise you not to do things that damage Dafa. I know from my own experience that treating Dafa with kindness brings blessings to one's life."

With major events happening in the universe and miraculous and true stories one after another happening next to us, have you ever asked the question: Why?