On the last weekend of August 2004, the eve of the U.S. Republican National Convention, more than 1000 practitioners came to New York City to clarify the truth of the persecution on bustling Manhattan streets. Many young practitioners also came with their parents to distribute fliers, clarify the truth and demonstrate the five sets exercises of Falun Gong in the heat. 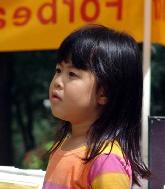 In a press conference held at Madison Plaza, little Fadu quietly listened to her mother's speech

Little Fadu came from Australia with her mother to tell people about the death of her father, who was tortured to death in China for practicing Falun Gong. 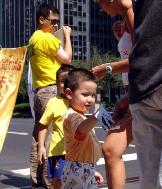 A 3-year-old young practitioner, assisted by his mother, distributing fliers to passersby