On the evening of July 25, 2002, I was arrested at a fellow practitioner's home by the local police who were lying in ambush. They beat and kicked me, aiming specifically for my chest and abdomen, causing dark purple bruises. My head had open bleeding wounds, and my face was also terribly swollen by the beating. 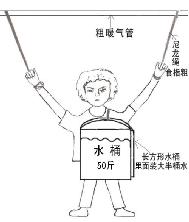 Later, the police drove me to a remote location to continue to abuse me. They found some hard and strong nylon rope that is used specifically for the boating and fishing industry. They suspended the rope from a roof-level heater pipe and hung me up, with both arms tied, and poured water over my face. The police then located two plastic rectangular "barrels" full of water, each able to hold about 40 to 50 jin [approximately 45 to 55 lbs.]. They said, "Since your are female, we will fill them slightly less." A few days before, they suspended two full barrels of water from another practitioner. They used a long cloth strip with each end tied around the handle of each barrel and hung them over my shoulder. After a while, observing nothing wrong with me, the police then wet the cloth strips. Since I was already sweating from the hot weather, the wet cloth strips stuck right to my skin. Each of the two policemen grasped one barrel, with one standing in the front and one standing in the back, and pulled the barrels back and forth in a sawing motion. The skin of my shoulder and neck became abraded and bleeding after being sawed like this for few times. I was tired and in pain, carrying two barrels of water which weighed almost 100 lbs., across my shoulder. The cloth even painfully cut the ligaments in my shoulder. After a while my hands began to swell up. In addition, one policeman began poking my armpits to increase the pain from this torture.

Another half an hour passed. My arms lost all sensation. Later I felt nauseated and was breathing heavily. I was tortured this way for almost four hours. When my arms were untied, they had no feeling at all and I couldn't hold anything. Only two weeks later could my arms hold anything again, and it was six months before they gradually recovered.

“Practitioner Ms. Feng Xiaomin from Shijiazhuang City, Dies After Being Forced to Leave Home to Avoid Persecution; Her Brother-in-Law is Tortured to Death”