"These gentle, graceful and easy exercises purify and bring into balance both body and many for all those who practice them regularly regardless of their age."

Falun Gong, also known as Falun Dafa, is an ancient, self-improvement practice for the mind, body and spirit. It is based on the principles of Truthfulness, Compassion and Tolerance. Falun Gong was introduced to the public by Mr. Li Hongzhi in 1992 and by 1999 it won its founder many humanitarian awards and a hundred million followers in China and around the world.

The fast growing movement greatly disturbed Jiang Zemin who was then the head of the Chinese Communist Party, especially when he found that many of his own party members had become followers. Out of fear of losing control over the Chinese people he passed a law forbidding the practice of Falun Gong exercises or even reading Falun Dafa books. At the same time he ordered the arrest and torture of anyone suspected of being a Falun Dafa practitioner. Without hearings or trials innocent men, women and children were put in prisons, forced labor camps and mental hospitals where they were tortured, raped, electrocuted, drugged and brainwashed. This persecution escalated to harassment, blackmailing and arresting citizens of other countries as well.

Jiang Zemin mistakenly believed that in a few months he could eradicate the practice of the righteous Falun Dafa. Despite millions of dollars spent on propaganda on radio, TV and newspapers, Jiang Zemin could not change most people's minds and hearts. Instead, he was met with quiet and persistent resistance. The Falun Dafa movement grew in popularity and soon spread all over the world. Mr. Li Hongzhi was given more awards and was nominated for the Nobel Peace Prize in 2000 and 2001.

The Chinese government's genocide against Falun Gong continues. Since this senseless persecution began, millions of innocent people have been arbitrarily arrested and beaten. Hundreds of thousands have been sent to labor camps, thousands have died of torture in police custody and countless others are still unaccounted for. Despite all these facts, the Chinese government categorically denies any use of violence. Nevertheless, several countries among them: USA, Canada, Germany, France, Switzerland, Hong Kong and Indonesia- have filed numerous lawsuits against Jiang Zemin and his Gestapo-like officers.

From its inception until today the teachings of Falun Dafa, including the five Falun Gong exercises, are being taught free of charge. It is practiced in over 60 countries and the books can be read in as many as 19 languages. These gentle, graceful and easy exercises purify and bring into balance both body and mind for all those who practice them regularly regardless of their age.

A personal note from Nogah Lord

I started Falun Dafa after seeing an interview on TV which included a short demonstration of the Falun Dafa exercises. As soon as I saw them I knew these were very unusual and very spiritual movements. In other words, I knew they were not just physical exercises to keep the body fit, but that they had a much deeper meaning and purpose. So I purchased the book, and again as soon as I started reading I felt as if a new energy entered my body. My initial response was that of fear, and that, too, surprised me. Why should I be so afraid of reading a book or doing simple exercises? But I felt tremendous fear for no apparent reason. Because of this fear, I was even more interested to find out more about this method. On September 9, 2001, I started practicing the exercises and felt very good. I met very gentle, sweet people who were practicing for several years and they, too, were very happy with the results. It is hard to describe something that can only be understood through personal experience. But if peace is the highest state we can aspire to, this method definitely takes one there.

A personal note from Rani Tamir, practicing in Buckingham, VA:

I have been practicing Falun Dafa for several years. Even before I heard of Falun Dafa I tried to improve myself and live according to moral principles. I also adopted healthier habits, eating more simple and cleaner foods and practicing yoga exercises. I was content with my path when I was introduced to Falun Dafa. I didn't feel I needed anything else, but as soon as I started the Falun Gong exercises and the two Falun Dafa books opened gates to a magical world that was hidden. I also received answers to many of my questions about life and the universe. I continue to receive deeper and more profound insights whenever I read the books.

The benefits I experience through Falun Dafa extend to all areas of my life, but I want to speak about one occasion when I was seriously injured in an automobile accident. After the car hit me, I was in and out of consciousness. I remember lying on the grass on my back in so much pain and barely able to breath, I was sure I was going to die. Although I could hear myself moaning for help, I felt myself surrendering to something higher, a sense of peace that I clearly relate to my work in Falun Dafa.

Eventually I learned that the doctors predicted that I would be on my back for a year spending most of that time in the hospital. Although I had many broken bones and needed immediate surgery, I considered it a miracle not to have permanent head or spinal injuries. I was out of the hospital in eight days and spent an additional eight days at a re-hab center before being released. A year later, I am doing very well. The grace and blessing I received, and still receive, I attribute directly to my work in Falun Dafa. 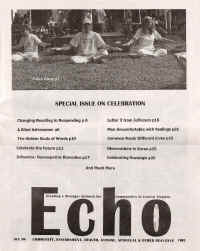 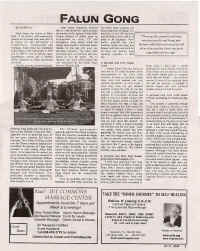 “Editorial: Stop Destroying Yourselves and Ruining Others; Do not be Used by Secret Agents”