(Clearwisdom.net) Germany's Middle-Bavarian Newspaper reported on October 28, 2002, that a huge banner reading, "SOS, China stop persecuting Falun Gong" was seen at the Square of Dechauplatz in Regensburg where local Falun Gong practitioners were holding activities to protest the brutal persecution of Falun Gong that was illegally banned in China in 1999. 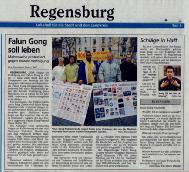 The report said that Falun Gong, a spiritual cultivation method based on the principle of "Truthfulness-Compassion-Forbearance," met with repression in China, resulting in violation of human rights, detention, brutal tortures and murder of innocent Falun Gong practitioners. It is reported that over 500 Falun Gong practitioners have been tortured to death up until now. Display boards exhibited the photos of some of those who have been tortured to death by strangling, suffocation, beatings and other torture methods.

Passersby accepted Dafa flyers, and some of them had a conversation with practitioners. A 47- year-old local resident expressed his understanding of this activity. He said that German politicians should extend their support to Falun Gong.

Mr. Li Hongzhi first introduced the cultivation method of both the mind and the body to the public in 1992. What do Germans think of it? A Falun Gong practitioner said, "80 percent of people hold positive attitude."

Interview: Being subjected to beatings at a detention center

A 24 year-old overseas Chinese student, and a Falun Gong practitioner, also joined this protest. He is currently studying German in Regensburg.

---- Why were you detained 15 days in your hometown -- Dalian City (Liaoning Province)?

---- I helped a friend in another city to hold a Falun Gong activity.

---- The policeman handcuffed me to a heating pipe, and they took turns slapping my face using leather shoes once every two to three hours daily.

----- They wanted me to sign a repentance paper to renounce Falun Gong and curse Master Li Hongzhi using the most despicable means.

---- Why did they release you in a short period of time?

---- My professor and friends helped get me out.