[Minghui Net] Early in the morning on February 3, 2001, reporters from local cable TV Channel 39 visited Herman Park in Houston, to interview the two dozen Falun Gong practitioners practicing there. The crew first videotaped the five exercises, which they found fascinating. Then the crew asked some questions of the practitioners. A practitioner named Diana responded to the questions on behalf of the group. Some of the questions asked were: what is Falun Gong, what is cultivation, and why do practitioners believe the victims of the self-immolation incident in Tiananmen Square were not Falun Gong practitioners? The crew was provided with Falun Gong materials such as the latest press statement regarding the self-immolation incident, VCDs of Falun Gong: The Real Story I & II,other stories of persecution, and Falun Gong Instruction videotapes.

Incidentally, a Chinese-speaking male, who seemed to have prior knowledge of our activities, was seen in the park asking about the identities of the TV crew, which some of the practitioners found very suspicious. 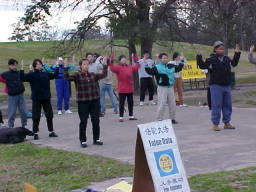 “Being Responsible to Society”