(Clearwisdom.net) Practitioner Li Meili (pseudonym) from Shuangcheng City, Heilongjiang Province was illegally detained in Shuangcheng City Detention Center on November 13, 2000 for going to Beijing to validate Dafa. In order to protest the illegal detention and to request an immediate release as an innocent person, she held a hunger strike. On the seventh day, Li was on the verge of death, so she was sent to the hospital. The detention center and the 610 office (which specializes in the persecution of Falun Gong) feared she might die, so they sent her home on December 25, 2000.

On the morning on January 30, 2001, officials from the 610 office and the director of Shuangcheng City Detention Center went to Li's home, and by using the excuse of "needing to talk" with Li, they tricked her into leaving with them. They asked her if she would continue to practice Falun Gong, and Li answered, "I will practice." The next day, she was illegally sent to the Wanjia Labor Camp where she was brutally tortured.

In this terrible environment, Li Meili developed scabies all over her body (as did other practitioners), to the point where she couldn't even open her eyes. She fell unconscious a couple of times and her whole body became covered with ulcers that seeped pus. There was not a single place on her body that was intact, and even the slightest movement led to excruciating pain. Li was compelled to stay in bed and relied entirely on other practitioners to take care of her. Even with her being in such a serious condition, the vicious policemen at the Wanjia Labor Camp didn't even allow Li's family to visit her during that over four-month period of detention. This broke their hearts. In addition, they would not let her family send her clothes, or any other things. It was not until August 28, 2001, the day the malicious police realized that Li was indeed going to die, that they sent her to a hospital. The hospital only kept her for one day and then sent her back to the "610 office" in Shuangcheng City the following day, while she was unconscious. At that time, there was no one in the office, so Li was then sent to the street administrative office where she was neglected. In the end, she was returned home by workers from the street office. Her whole family was heartbroken upon seeing her in such a miserable state. Her mother-in-law said, "What crime did my daughter-in-law commit? Should she be tortured to this state and then sent home when she is nearly dead?" 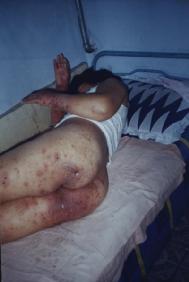 The street office pressured Li's family to hide the news from the public and especially to not show her picture to practitioners. Because there was no place for her family to turn to for justice they began to prepare for Li's funeral [in the case of her death] while bearing the feelings of sorrow and rage in their hearts. This picture was taken soon after her release and shows the widespread scabies on her body.

The horrifying Wanjia Labor Camp is only one among many vicious Labor Camps in China and Li Meili is just one of thousands and thousands of Falun Gong practitioners that have been tortured by Jiang Zemin's criminal followers. We hope people with kind hearts around the world will pay attention to this.

“Practitioner Dong Cuilian of Lingyuan, Liaoning Province, Solemnly Declares That All Her Statements or Actions That Violated Dafa Are Invalid ”