San Francisco: Activities Calling for an End to the CCP's 10-Year Persecution (Photos)

On July 25, San Francisco practitioners held a series of activities to call for an end to the Chinese Communist Party's (CCP) 10-year persecution of Falun Gong. 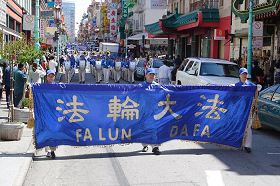 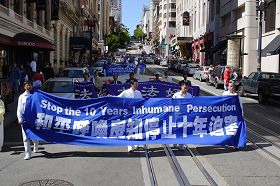 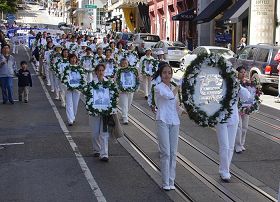 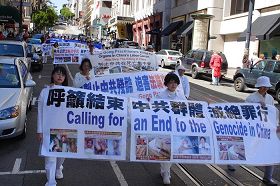 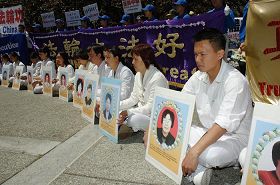 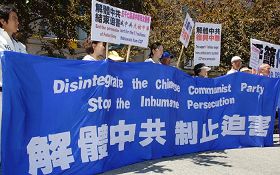 In the morning, at Chinatown's Golden Garden, a rally was held after a group exercise practice. More than ten victims of the persecution shared their first-hand accounts and urged the Chinese people to see clearly the evil nature of the CCP and quit it and its affiliated organizations as soon as possible. 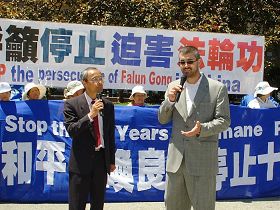 San Francisco Supervisor Chris Daly attended the rally and gave a speech. He said that he was very sad when he thought about Chinese Falun Gong practitioners being persecuted in China and admired the persistence of the practitioners. He said, "As a friend of Falun Gong, I can tell everyone: Falun Dafa is good! The principles of Truthfulness-Compassion-Forbearance should be made known to everyone. We condemn the thugs who persecute Falun Gong. At the San Francisco City Hall, I will always speak out for you." 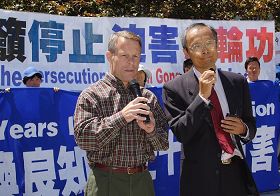 At the rally, Matt Grocott, a city councilman for San Carlo, voiced his support as well. He said that Americans have a mission to spread the torch of freedom around the world and he supported Falun Dafa practitioners' efforts for freedom. 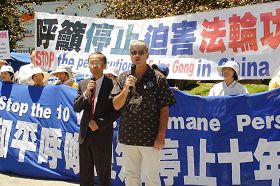 Jeffrey from Amnesty International (AI) said that AI has always stood by Falun Gong's side and supported the practitioners' belief in Truthfulness-Compassion-Forbearance. He said that the Chinese Communist regime's 10-year persecution is a shame; the whole world needs Truthfulness-Compassion-Forbearance, and AI is always against torture and persecution.

Mainland China rights activist Mr. Guo Baosheng was once imprisoned for his efforts to defend people's basic rights. Mr. Guo stated, "The CCP not only controls people physically but also tries to control people's minds. It doesn't allow people to have freedom of belief. I admire the Falun Gong practitioners' 10-year peaceful efforts to resist the persecution." 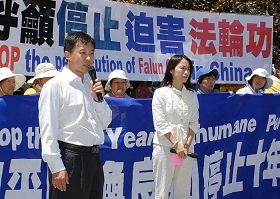 Mr. Dongwei Bu came from Beijing last December. He was detained in Tuanhe Labor Camp in Beijing for his belief in Falun Dafa and was brutally tortured and subjected to sleep deprivation. He said, "When some practitioners went on hunger strike, guards forcefully fed them either light porridge or concentrated salt water by introducing a hose through the nostril. A few practitioners were suffocated to death as the hose was wrongly pushed into the lungs... I hope that all kindhearted people can help us end this persecution as soon as possible. Ten years is too long!" 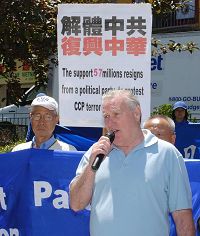 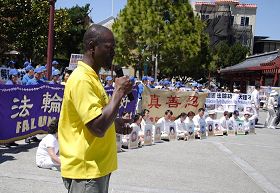 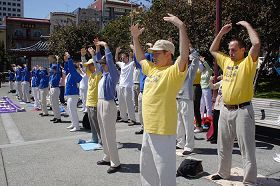 At 3 p.m., Falun Gong practitioners and supporters started a march. The procession marched from Golden Garden in Chinatown to Union Square via Stockton Street. Lead by giant banners which read "Peaceful Call for Conscience - Stop the Persecution of Falun Gong," "Falun Dafa is Good," and "The World Needs Truthfulness-Compassion-Forbearance," dozens of female practitioners in white dresses held portraits of some Chinese practitioners who were persecuted death in China. Scores of practitioners displayed banners and posters which read "Stop the Persecution of Falun Gong," "Disintegrate the CCP - Stop the Persecution," "Support 57 Million Chinese People Who Have Withdrawn from the Evil CCP," "Heaven to Destroy the CCP - Heaven Protects China." Some practitioners distributed truth-clarifying fliers along the parade route. Many people stopped to watch the parade and took photos of the procession. 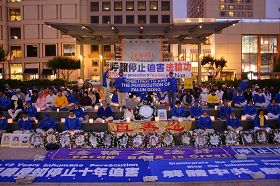 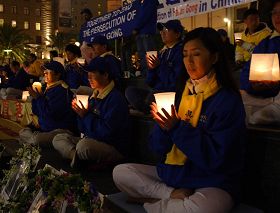 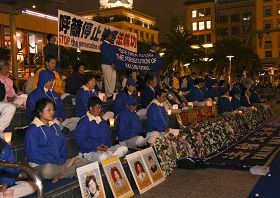 At dusk, practitioners lit candles at Union Square to commemorate practitioners who have died as a result of the persecution and to honor all Falun Gong practitioners' unyielding faith.