On July 18, 2009, on the eve of another "July 20th," Falun Gong practitioners in southern Australia held a rally on Victoria Square in the center of the city of Adelaide to tell people about what's really happening regarding the persecution of Falun Gong in China. 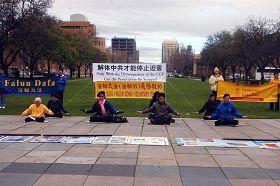 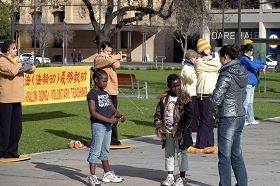 The rally started at 11 am. Practitioners displayed banners with the messages, "Let's join hands to put an end to the live organ harvesting by the Chinese Communist Party (CCP)!" "Disintegrate the CCP stop the persecution!" They laid out informational display boards and showed a truth-clarification video.

One woman quietly looked at the paintings created by practitioners and told a practitioner, "It makes sense!" The power shown in the paintings made this lady understand the evilness represented by the CCP. She said that the persecution is very cruel and ridiculous.

When a man asked why the CCP persecutes good people, the practitioners told him that it is because the CCP is against traditional Chinese culture. In mainland China today, anyone who wants to be a good person in line with the principles of Truthfulness, Compassion and Forbearance will be persecuted. When a practitioner gave the gentleman a "truth-clarification" DVD and wished him well, he accepted it with a smile.

A Korean man was reading the truth-clarification boards attentively. He asked a practitioner, "Why did the CCP want to persecute Falun Gong? Isn't Falun Gong too powerful so that the CCP is very much afraid?" The practitioner said, "Any other government would be happy to have more good people. In this way it can bring real prosperity to the country. The reason the CCP persecutes Falun Gong is that it [the CCP] has no concept of traditional Chinese culture." The man replied, "Heaven knows what it did. You practitioners just do what you need to do. You don't need to worry about what the CCP is doing. You are innocent and kind, and you will definitely win."

One elderly man talked with two practitioners for a long time and expressed his support for their peaceful protest. Before leaving, he gave the practitioner his business card and said he would be glad to help if practitioners ever needed him.

Two young girls wanted to learn the exercises. A practitioner went over to teach them and they showed great interest. After they learned the "Heshi"gesture, they repeated it many times. Before leaving, the girls thanked the practitioner. Their mother was following along with the exercise movements from a distance.

In the afternoon, when the practitioners were sending forth righteous thoughts together in the square, a strong wind was blowing. However, the practitioners remained unmoved. Some passersby said in Chinese, "Falun Dafa is great. Look, they are rock solid in the wind and rain."

The rally also attracted the attention of Chinese people from China. A young couple walked quickly by, but stopped when they saw the banners and display boards. They went up closer to the boards and read them carefully. The young man said, "How cruelly they have been tortured! Isn't Falun Gong simply an exercise method?" The young lady said that the persecution might not really exist. The young man said, "I believe it does. They [the CCP] have done this sort of thing before." A group of passersby, who appeared to be Chinese students, accepted the truth-clarification materials and carefully read the display boards.

Some of the older practitioners, approaching 80 years old, sat there as solid as a rock, with a resolute though kind expression. Several practitioners demonstrated the five sets of exercises and even continued after it started to rain. A young man asked to sign the petition. He said loudly, "You are admirable!"

Right up to the very end of the event, many people read the truth-clarification display boards in order to learn the truth.

“San Francisco: Activities Calling for an End to the CCP's 10-Year Persecution (Photos)”

“Ms. Shen Yueping Dies As a Result of Abuse in Prison”